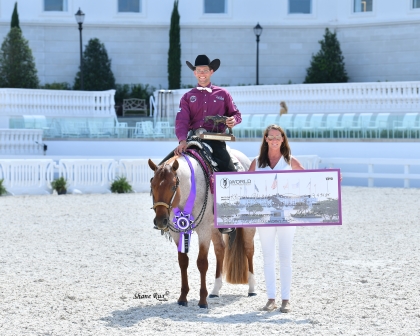 2. Kenneth Banks, See The Magic In Me, Kenneth & Laina Banks

We caught up with Courtney ringside to chat about her big win. “Roo is 13 years old and we have had him for about three years now. He’s such a fun horse and is pretty much the same for every show. He never tries to cheat and does his best for me each time he steps into the pen. My favorite thing about him is his extended lope!” I’m looking forward to showing him the rest of the week; we will be showing in the Ranch Rail tomorrow, which should be fun out by the gorgeous trees.”

The afternoon’s feature class schedule wrapped up with the $10,000 NSBA 3-year-old Open Western Pleasure in World Equestrian Center – Ocala’s Grand Arena. Sixteen entries tried their best to impress the panel of four judges, but none could top Aaron Moses and VS The Fireman (Machine Made x VS Lady in Red). The dynamic duo unanimously secured the win – taking top remarks from all judges.

“This horse is really special to me. He listens to every step. He has a ton of self-carriage, you just put him in gear and sit there. He was supposed to be my Masters entry last year, but I got hurt and couldn’t show him. Jay Starnes was kind enough to show him for me at the World Show and he won. This was actually the first time that I have shown him,” said Moses.

2. Kenneth D Lakins Jr, Made Like No Other, Mr. and Mrs. William Wilkes