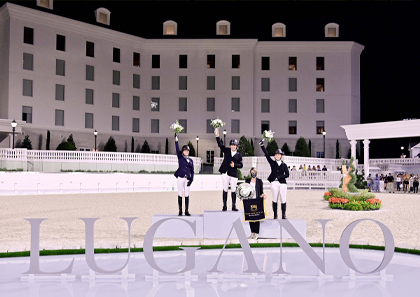 The WEC Grand Arena hosted thrilling equestrian sport today for the $200,000 Lugano Diamonds Grand Prix, the finale of the Winter Spectacular. Courses for the classes were co-designed by Anderson Lima of Brazil and Bobby Murphy of Lexington, Kentucky, and featured technical tracks with multiple combinations. Stunning floral decorations and other fanciful elements including a lovely Lugano water feature, a unique World Equestrian Center – Ocala Equestrian Hotel wall, and an elegant golden ring jump made the last Saturday evening under the lights extra special.

Forty-seven entries took to the WEC Grand Arena under the lights tonight for the $200,000 Lugano Diamonds Grand Prix. Ten entries advanced to the jump-off, but it was Aaron Vale and Taylor Granat’s Candro Van De Zuuthoeve (Thunder Van De Zuuthoeve x Walach Van De Zuuthoeve) that set the pace with a time that would prove unbeatable.

During the 12-week Winter Spectacular at World Equestrian Center – Ocala, Aaron Vale has taken 1st place in four grand prix classes. Though Vale and Candro Van De Zuuthoeve had landed in the top few placings in grand prix classes several times throughout the season, the pair had yet to secure a win. Tonight, Vale and the 12-year-old Belgian Warmblood gelding were first to contest the course in the jump-off. They set the pace with an impossibly quick, clear round in 41.208 seconds, which would ultimately prove unbeatable.

Rounding out the top three placings were Bryn Sadler and Showcase 81, LLC’s Cinven CR (Clearway x Raissa CR). Sadler and the 13-year-old Holsteiner gelding have earned top placings in grand prix and welcome prix classes throughout the season and brought their A-game tonight. The pair navigated a clear jump-off round in 43.235 seconds for 3rd place.

Junior rider Izzy Beisel and the 15-year-old Dutch Warmblood stallion took 1st place in the $7,500 Futures Prix during weeks 9 and 10 of the World Equestrian Center – Ocala Winter Spectacular and were on form again this morning. The pair took to the course near the end of the order, jumping a clear first round in 78.194 seconds, well within the time allowed of 82 seconds. They advanced straight to the jump-off, delivering a second clear round in 36.616 seconds to ultimately win the class.