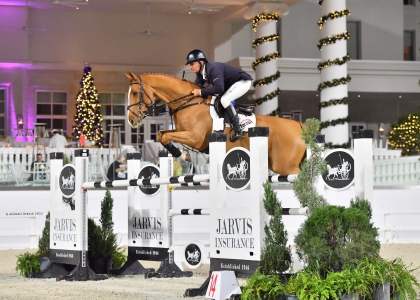 Ocala, FL – The $24,000 C. Jarvis Insurance Welcome Prix was the highlight event of the evening as 29 athletes took to the WEC Grand Arena to vie for the lion’s share of the prize money. World-renowned FEI Level IV course designer Bernardo Costa Cabral (POR) crafted the evening’s inviting tracks where was Aaron Vale (USA) and Thinkslikeahorse’s Cristo Beech (Its The Business x Ragua) galloped away with the victory.

Always competitive, Aaron Vale secured two of the nine double-clear rounds in the jump-off. Vale was the first athlete down the ramp to attempt Cabral’s shorten track. Vale attempted the course aboard his first mount, I Admerie R 4  (Den Ham Blue R x W.Adermie 1) owned by Lori Osterstock. The pair flew around the jump-off in 40.780 seconds.

Numerous competitors tried to overtake Vale and I Admerie R 4’s quick time, but none succeeded until Tom Foley (IRL) and Sher Al Farm’s Idalgo (Catoki x Quidam’s Olgam) entered the arena. Foley and the nine-year-old Dutch Warmblood gelding dashed around the jump-off track, leaving out strides to stop the clock at 39.581 seconds.

However, victory was not yet sealed as Vale returned later in the order aboard his second mount Cristo Beech. “I spoke to Tom [Foley] in the schooling ring and he mentioned that he felt like he could have gone a bit faster to the skinny, which left a door open for me. I knew I had to be a quick as possible to the skinny in order to catch his time.”

Vale and the 11-year-old Warmblood gelding started on a strong gallop after the tone, “I caught fence one forward. He didn’t turn as well as I wanted to fence two, but when I asked for more to the skinny, he gave it to me. We were almost too fast to the point where he had to jump up a bit slower to be careful, then that took the six strides out of play. He ended up veering off the right a little too much, but it ended up working out well because I was able to land left to get to the double combination. Then I tried to be as fast as I could to the final two fences.”

Vale and the scopey Cristo Beech flew through the timers in 39.211 seconds to seal the victory.

Vale spoke about his talented mount, “He’s overly cautious and almost too careful at times, but when he is trusting, then there’s no beating him. I have had him for about a year now and he has racked up some great placings. I really enjoy the horse. As long as he keeps putting his trust into me, I think he will be winning a lot more.”

As other entries followed Vale and Cristo Beech’s incredible round, only one pair came close to catching his time. Rowan Willis (AUS) and his own Wellington Grey Goose (Corlensky x Grandira) were the second-to-last pair to attempt the jump-off. Willis and the speedy 11-year-old Warmblood mare soared around the track, finding each fence right out of stride in 40.582 seconds which was good for third place.