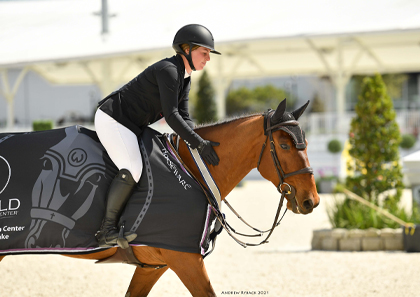 Clear, sunny skies and warm temperatures set the perfect backdrop for another week of exciting equestrian sport as we kicked off Week 10 of the World Equestrian Center – Ocala Winter Spectacular 2021. Feature classes began this afternoon with a field of 22 entries vying for the win in the $20,000 WEC Welcome Prix. The class featured a technical course designed by Bernardo Costa Cabral of Portugal, an FEI Level 4 designer who assisted with courses at the Beijing Olympic Games in 2008 and again at the 2012 Olympic Games in London, Great Britain. Cabral’s course included several adjustable lines, three combinations and a liverpool, as well as options for tidy inside turns in the jump-off. Twelve entries advanced to the jump-off and seven jumped double clear, but none could best Kady Abrahamson aboard Banco Du Moulin (Popstar Lozonais x Gerboise Du Moulin), who topped the class for the second week in a row.

Banco Du Moulin, owned by Sharn Wordley, Steve Tinti and Sean Jobin, is a newer mount for Abrahamson. She and the 10-year-old Selle Francais gelding have collected several ribbons in the high amateur classics throughout the season and stepped up to the 1.45m height last week to win the $20,000 WEC Welcome Prix. The pair returned to the WEC Grand Arena this afternoon for the $20,000 WEC Welcome Prix searching for a repeat performance. Abrahamson and Banco Du Moulin easily found a clear first round in 77.836 seconds, well within the time allowed of 82 seconds. They continued straight to the jump-off, opting for tight inside rollbacks to fences 14 and 11, and blazed through the timers at 33.635 seconds. Their time proved unbeatable and the duo took home the lionshare of the prize money, a World Equestrian Center-branded Horseware cooler and a stunning crystal trophy from the National Snaffle Bit Association (NSBA).

Santiago Lambre and his own Comtess were just behind Abrahamson and Banco Du Moulin. Lambre and Comtess topped the $20,000 Welcome Prix during Week 4 of the World Equestrian Center – Ocala Winter Spectacular, and also earned a 2nd place finish in last week’s $75,000 Golden Ocala Golf & Equestrian Club Grand Prix. This afternoon, Lambre and his scopey mare were chasing the win, jumping a clear first round in 81.190, just under the time allowed. The duo continued straight to the jump-off, also opting for inside turns to to fences 14 and 11. They raced through the timers at 34.411 seconds, sliding into 2nd place by just under one second.

Morgan Ward and Morlynn Farm’s Colourful RW (Carrico x Zypria II) rounded out the top three placings in this afternoon’s $20,000 Welcome Prix. Ward and the 10-year-old Holsteiner gelding earned 6th place in the highly competitive 1.30m jumper class during Week 7 of the World Equestrian Center – Ocala Winter Spectacular, preparing them well for the 1.45 welcome prix. The pair was quick and clear in the first round in 78.355 seconds, then advanced straight to the jump-off to jump a second clear round in 35.250 seconds, securing 3rd place.

Abrahamson took a moment to chat with us after the class about her win aboard Banco Du Moulin, “After our win in last week’s $20,000 Welcome Prix I was going to give him the week off, but I thought that he would be fine just doing the welcome this week. More horses jumped clean this week than last week, so there was more pressure in this week’s jump-off. Some people were doing the leave out in five strides in the first line and five in the last line, but Banco Du Moulin is a really little horse. The first line allowed for a good gallop and we were able to do the five, but I knew we would have to do six in the last line after the rollback. However, we were still able to beat 2nd place by almost one second, which was exciting.”

Abrahamson shared a story about Banco Du Moulin with us, “He is owned by Sharn Wordley, Steve Tinti and Sean Jobin. This is only my fourth or fifth show on him. It’s funny because, when I first saw Sharn riding him, I told Sharn that he looked a lot like the stallion he used to ride, Popstar Lozonais, not knowing that Popstar Lozonais is Banco Du Moulin’s sire. Banco Du Moulin is the spitting image of Popstar Lozonais with the same markings, same attitude and same jump. He has been really awesome. I am really thankful that Sharn, Steve and Sean allow me to ride him.”