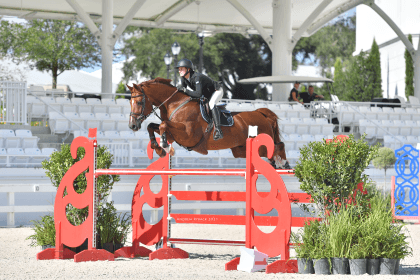 Petersen and Derek Petersen’s Diamant’s Legacy has had great success during the NSBA Ocala Summer Series, earning second place in Week VIII’s grand prix and third place in last week’s grand prix. Petersen and Diamant’s Legacy entered the class toward the end of the order, “I thought the first round was pretty technical. You needed to decide what you wanted to do before the lines. It rode a bit shorter for [Diamant’s Legacy] which isn’t ideal because he has such a big step. So, I made sure to get my adjustments and fit in the numbers early.”

Petersen and Diamant’s Legacy produced a perfect first round, soaring to the top of the standards to stop the clock at 74.942 seconds. Petersen and the 12-year-old Oldenburg stallion advanced straight to the jump-off, “I left out a stride and got eight from one to two. Then I left out again, doing six strides from two to three. I tried to be really short back to the vertical then I moved up to leave another stride out to the oxer. I did one less to the double combination and did nine strides home.”

Petersen and Diamant’s Legacy flew through the timers to stop the jump-off clock at 33.349 seconds to snatch the win. “He really just loves that ring. He does better in that ring than anywhere else,” expressed Petersen.

Just behind Petersen and Diamant’s Legacy were Santiago Lambre and his own Doloris (Harley VDL x Colinda D). Lambre (MEX) and Doloris earned second place honors in last week’s $10,000 WEC Ocala Futures Prix. Lambre and the 13-year-old KWPN mare delivered a fast and clean first round, stopping the clock at 74.191 seconds. The pair advanced straight to the jump-off, flying from fence one to two to leave out a stride to three. The pair rolled around the turn to fly through the remainder of the course stopping the clock at 33.626 seconds, just three hundredths of a second behind Petersen and Diamant’s Legacy.