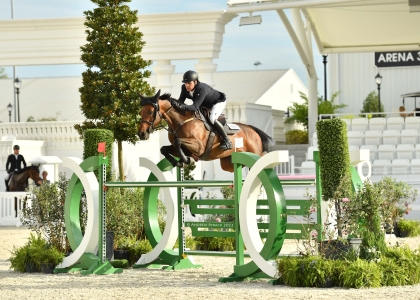 Twenty horse-and-rider combinations negotiated the first round track cleanly, advancing directly to the jump-off. The top three were established early in the class with times that remained uncatchable.

The first double clear entry in was Dorothy Douglas (USA) and Davenport Farm’s MTM Pablo (Perigueux x Celina). Douglas and the nine-year-old Warmblood gelding had a recent win during Week IV’s $10,000 Buckeye Nutrition Futures Prix. Today, the pair were the pathfinders in the class setting 33.133 seconds as the time to beat, which ultimately secured the third place position.

Today, Lambre was determined to grab the victory, “I watched Kristen go very fast, so I knew I had to take all of the risks in order to win. Cava is a very quick horse, and it was just enough to win.” Lambre and speedy 11-year-old Oldenburg gelding flew the timers in 33.133 seconds to steal the victory.

Lambre was effusive about the talented gelding owned by All In Horses and Jan De Waard, “He is a super competitive and brave horse. He has won a few FEI classes already. He loves this venue and tends to really show his speed in that arena. Even if you add strides in the jump-off, he is so naturally quick it doesn’t matter. I think he is going to do some big classes in the future. He will do the Saturday night grand prix this week and hopefully some FEI grands prix soon.”