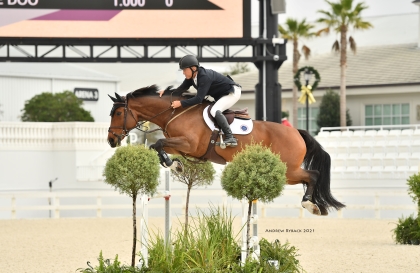 Simpson is fresh off a very successful first week at WEC where he topped several events including the $75,000 Coca-Cola Beverages Florida Grand Prix aboard his other mount Chacco P.

Simpson continued his successful streak today with the 10-year-old Warmblood mare. Simpson and Whoop De Doo entered the class toward the end of the order, delivering a smooth and fast first round stopping the clock at 69.477 seconds, well within the time allowed.

Simpson was very proud of Whoop De Doo, “She felt even better this week. She is really coming into her own. She is a homebred horse that is ten years in the making. Her success comes from her owner being so patient. Whoopy wasn’t easy to start with, without a patient owner she would have been cast away a long time ago. Now, I think she is going to be an incredible show jumper. She has the scope for 1.60m and I think she will be able to know when it’s an important class and win it.”

Simpson and Whoop De Doo advanced straight to the jump-off, galloping from fence one to two in five strides. The pair quickly turned back to the C. Jarvis Insurance combination to fly to the next oxer. They soared over the Ethel M. Chocolates vertical to take a tight inside turn to the large white vertical. “I was going to that fence blind. When you are galloping in that gap you have to stay straight. There isn’t much room for a nice bend. It would have been easy to the slice the vertical but then you would be turning the wrong way,” laughed Simpson.

Simpson and Whoop De Doo jumped the tall vertical with ease, then flying to the final fence to stop the jump-off clock at 34.984 seconds for the win.