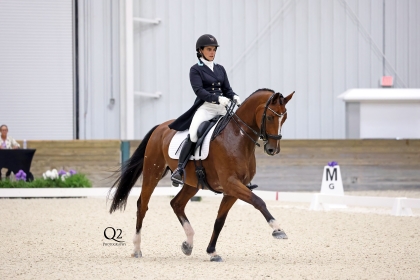 Owen and Franklin, a 12-year-old KWPN gelding by Up To Date, won with a score of 68.206%, which was also a personal best. Yesterday’s Prix St. Georges winners, Anna Merritt (USA) and Fox Creek’s Censational, finished second on 66.66.853%.

Owen, who is assistant trainer to the previous days’ grand prix winner Anna Marek, started out in the discipline of eventing but switched full-time to dressage seven years ago. She has been paired with Franklin for a year and a half, and this is only their second CDI competition.

“He likes to show off, and the extended canter is his favorite part of the test,” said Owen. “He has this go button that is always there and ready, so it’s a lot of fun to ride. Yesterday he was a little bit wild. His extended trot yesterday, he thought should be an extended canter. We messed up that move, but today he kept it together.”

Owen plans to compete with Franklin at the WEC Dressage November CDI3* and will be continuously working on the movements for grand prix. Franklin has enjoyed competing. Owen noted, “He definitely can feel the energy of the crowd.”

The World Equestrian Center Dressage September CDI3* will conclude on Sunday, September 18, 2022, with Intermediate II CDI3* at 9 a.m. and the Intermediate 1 Freestyle CDI3* at 10:50 a.m. For more information, visit www.wec.net.