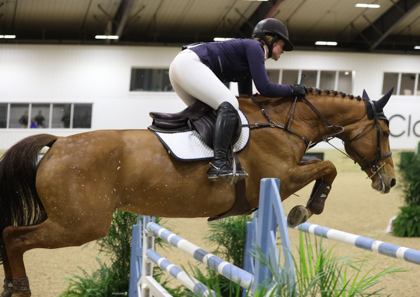 Tonight’s $25,000 WEC Grand Prix included a field of 17 who took to the Sanctuary Arena to contest the track designed by Bobby Murphy of Lexington, Kentucky. Four horse and rider combinations qualified for the jump off, but it was Charlotte Clark of Kendalwood Farm in Sunbury, Ohio, aboard her own Kinsella who captured the win in an amazing 34.312 seconds.

Clark and Kinsella (Capitalist x Jerpoint Mist), an 11-year-old Chestnut Irish sport horse mare, are frequent visitors to the winner’s circle at World Equestrian Center having won countless feature classes at the venue. Last to go in the jump off, Clark and Kinsella went for it, hugging the inside and galloping around the twisting track, flying over the final oxer to victory.

Last week’s $25,000 Grand Prix winners Catch A Star HSS (Sheraton x Tolinda) and Kevin McCarthy of K&K Sporthorses LLC went second to last and delivered a blazing fast jump off round of 34.721. McCarthy and the 11-year-old Swedish Warmblood mare were poised to win again, when last to go Clark and Kinsella sliced milliseconds off their time, bumping them to second place.

David Beisel and his own Essince W (Chacco Blue x Rossan) secured the third spot atop the podium for the second week in a row. Beisel of David Beisel Stables in Goshen, Ohio, and the 12-year-old KWPN Essince W are always game in the jump off and tonight was no exception. The pair wowed with a jump off time of just 34.812 seconds, earning them third place in the competitive class.

Earlier in the day, 15 horse and rider combinations contested the $7,500 Futures Prix 1,30m, which featured a course designed by Bobby Murphy of Lexington, Kentucky.  Although 5 pairs qualified to jump off, none could catch Jill Gaffney and Z Love Story who set an early time to beat that could not be bested.

Gaffney of Freestyling Farms LLC in Batavia, Ohio, and Z Love Story (Hunter x Elli) a 14-year-old bay Holsteiner mare, are frequent visitors to the winner’s circle at World Equestrian Center. Second on course, the pair produced a clear first round and headed straight for the jump off. They attacked the course with their signature style, stopping the clock at an impressive 31.613, which proved impossible to beat.

David Beisel piloted Hendrik (Bustique x  Utareusa) to a clear first round and continued on to navigate a clean jump off in 33.806, for a second pace finish. Beisel of David Beisel Stables in Goshen, Ohio and the 9-year-old bay Dutch Warmblood gelding owned by Chris Richards, placed 6th in last week’s $7,500 Futures Prix..

Lani Hutchison and Light Show (Quasimodo Z x Predente) owned by Diane Masters of Sunbury, Ohio, earned a clean and clear first round to qualify for the jump off. Hutchison and the 13-year-old bay Dutch Warmblood gelding stopped the jump off clock at 35.803 with no faults to secure a third place finish.