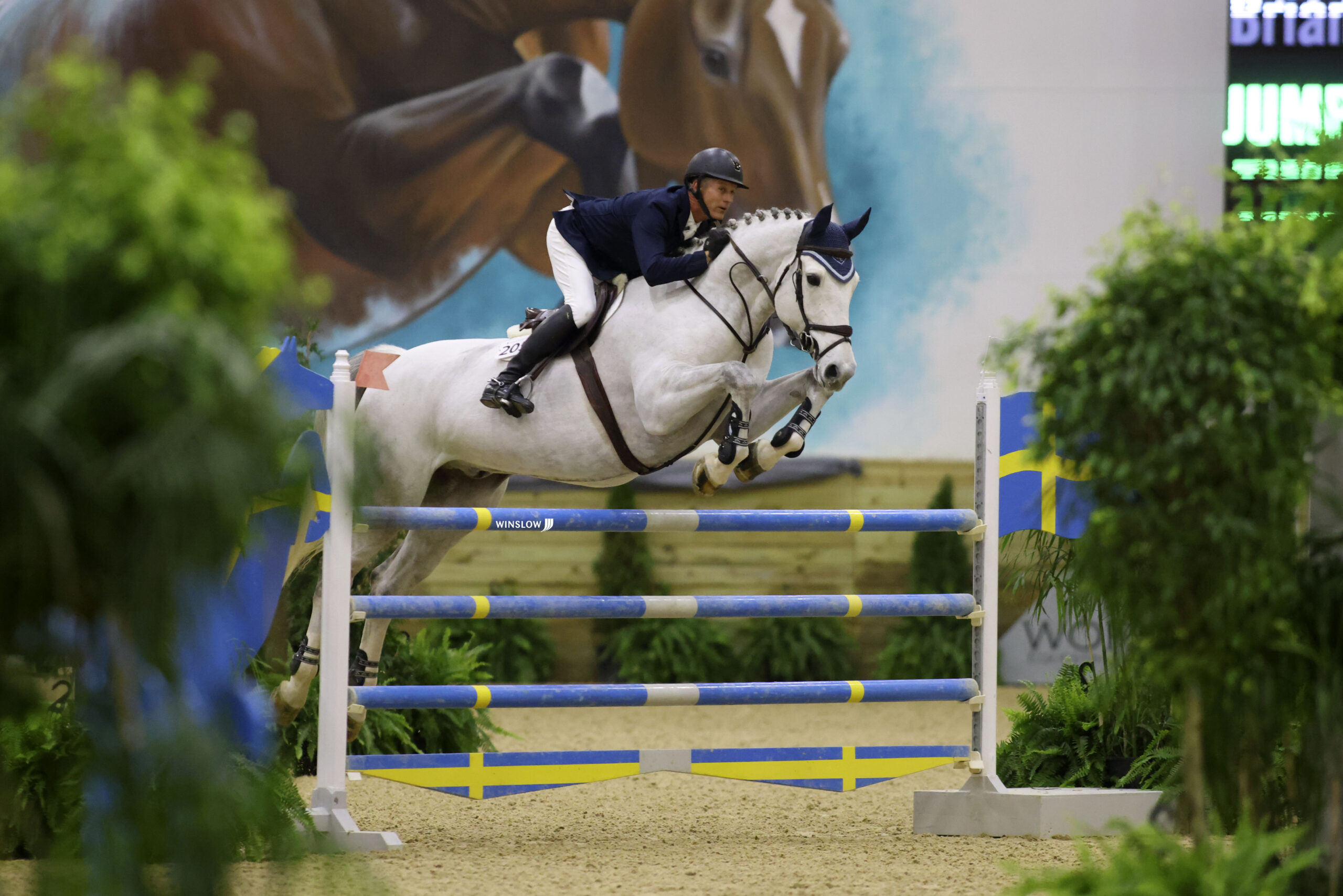 Wilmington, OH – A warm spring breeze filled the open doors of the Sanctuary Arena as week XII Winter Classic feature classes capped off with a field of eleven competing in the $30,000 WEC Grand Prix. The course designed by Bobby Murphy of Lexington, Kentucky featured fifteen technical jumping efforts and an 82-second time allowed, which proved difficult for many. Just three pairs went clear in round one, all of whom later went double clear in the jump-off.

All three jump-off entries gave it their best, but time proved to be the ultimate determining factor as the top two placings were just fractions of a second apart. Brian Shook and Oakvale Ventures LLC’s Cinna HP (Couleur Rubin x Coco Chanel Z) claimed the top prize, winning the class by 0.2-seconds.

Shook credits his longtime partnership with Cinna HP to their $30,000 Grand Prix win. “Cinna HP is a horse that I bred and raised. I’ve had him from the very beginning! Because we have been together for so long, we have formed a nice partnership. That bond really transfers into the show ring.”

Riding out of Hunterpointe Farm in Holly, Michigan, Shook and the 10-year-old gray Warmblood gelding navigated the technical course with skill to earn clear times of 76.779 seconds and 39.666, ultimately topping the leaderboard.

Shook went on to add, “His specialty is his huge stride! This was only his second Grand Prix that we have ridden in. He is still learning, but he has a big jump and is continuing to learn how to ride the bigger tracks. I am really pleased with his great attitude and the try that he gives me every day.”

Saturday’s feature classes of Winter Classic week XII unfolded with fifteen horse and rider combinations challenging the $10,000 Futures Prix 1.30m in Wilmington’s Sanctuary Arena. The track featured fourteen jumping efforts in the qualifying round and eight efforts in the jump-off. Although two riders went clear in round one, only Drew Arnold of Indianapolis, Indiana and Theresa Kraft’s Chaccomo 11 went clear in the jump-off to capture the win.

The pair remained calm and consistent and round one, going clear in 71.919 seconds, several seconds under the 76-second allowed time. Their quiet and careful attempt during the qualifying round secured them a spot on the short course, where they galloped the testing track, leaving all the rails up for a winning time of 38.298 seconds to take home the win.

We caught up with Drew ringside to chat about today’s success. “This horse is new to me. He came from Theo Genn and I’ve now had him for three months. Unfortunately, I had an accident where I fell off and I was out for a few months. Today was our debut back and I wanted to enter him in the Futures Prix because I thought it would be a good step up for confidence but still have the chance to be competitive.”

Drew went on to talk about strategy and his new mount, “I loved the course! The height wasn’t necessarily set for difficulty but the lines made you think about what you were doing, rather than just riding a super talented horse. The jump-off was a great balance between going fast and making tight turns. As for this horse, he is sired by Chacco Blue and he is just an angel in the barn! He is the sweetest horse ever and he absolutely loves his job. He’s such a saint.”

Photos courtesy of Winslow Photography. The show continues through tomorrow! Watch the action live at ClipMyHorseTV.