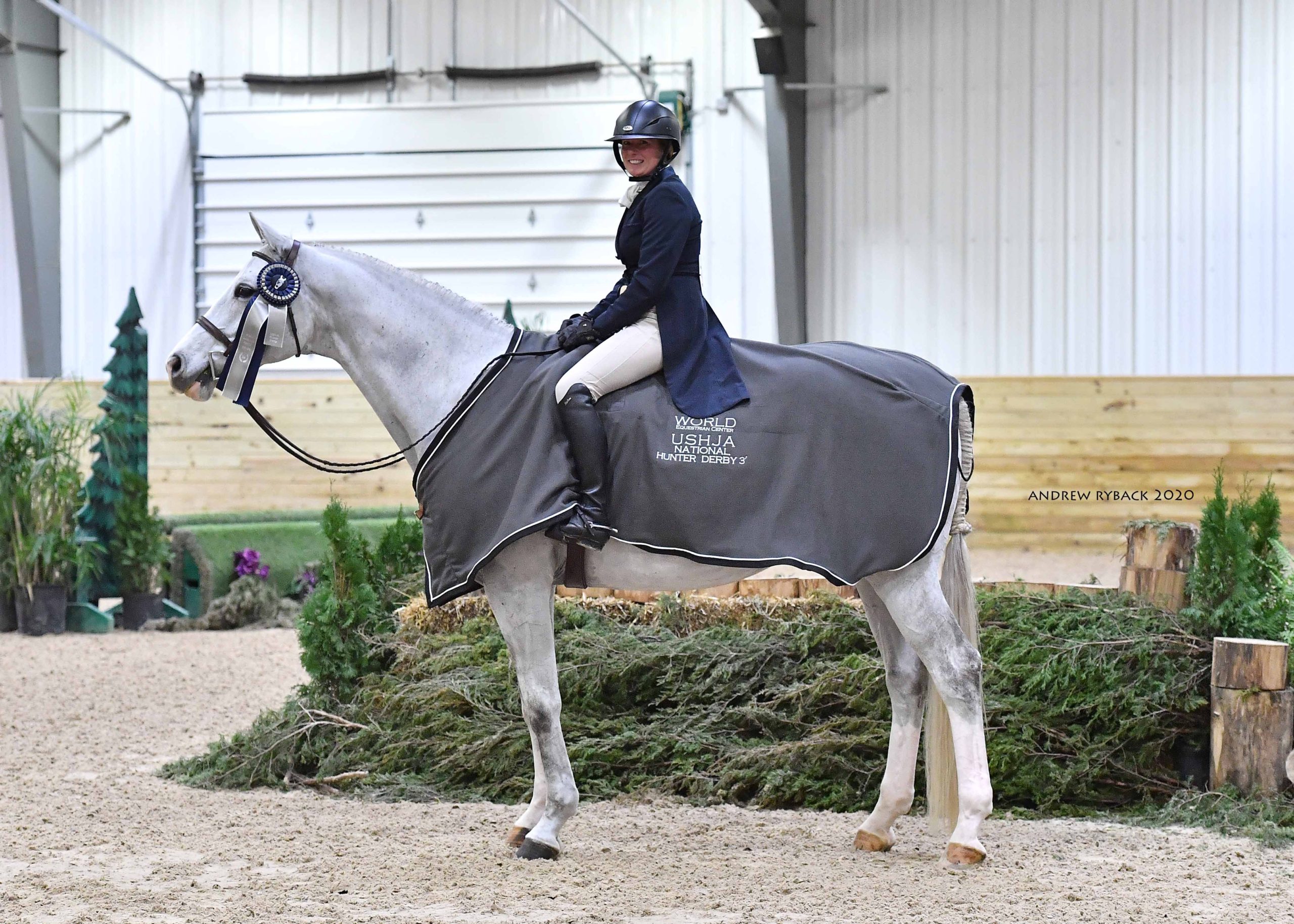 Twenty four stunning hunters gathered in the R+L Arena this afternoon to contest the $5,000 USHJA National Hunter Derby. The ring emulated the hunt field with plentiful greenery, several natural log and branch fences and a charming chicken coop-flanked fence. The course for this afternoon’s class featured adjustable bending lines, a two-stride line and four high options. Competition was fierce with a cutoff score of 80 heading into the handy round, but it was Danielle Grice and Allison Reichenbach’s High Life (Quarterback x Parma) that rose to the top of the class.

One of the first to go in the $5,000 USHJA National Hunter Derby was Charlotte Clark and Donna Leetz’s E Houston. The pair recently took top placings in the Green Hunters during week five of ‘Winter in the Midwest 2020’ at World Equestrian Center and returned to the R+L Arena this afternoon to try their hand at the derby. Clark and the seven year old Holsteiner gelding delivered an impressive first round, taking all four high options and earning a score of 87.5.

Next in the ring was Danielle Grice and Allison Reichenbach’s High Life (Quarterback x Parma). High life frequents the Amateur Owner Hunters with Reichenbach, preparing him well for this afternoon’s 3′ track with 3’5″ high option fences. Grice and the sparkling ten year old  German Sport Horse gelding were eye-catching in the first round, taking all four high options for a score of 88.5.

Katana Kennedy-O’Brien piloted Belle Rolfe’s Boure (Clintord x Silene) to a noteworthy first round. The pair regularly take top placings in the Green Hunters and were ready to show off their skills in this afternoon’s class. Kennedy-O’Brien and the ten year old Hanoverian gelding also took all four high options, earning a score of 85.5.

The ring was refreshed and the top twelve entries returned for the handy round. Kennedy-O’Brien and Boure returned near the end of the order, upping the ante for the remaining entries by taking tidy inside turns to fences one, six, seven and nine. The pair took all four high options, bringing their handy round score to 89 for an overall total of 174.5. Grice and High Life followed shortly after, mimicking Kennedy-O’Brien’s handy inside track. The pair flowed through the course with ease, taking all four high options perfectly in stride. Grice and High Life earned a handy round score of 90, bringing their overall total to 178.5 and moving them into the top spot. One of the last to return was Clark and E Houston. The pair took inside turns to fences one, seven and nine and opted for all four high options, earning a score of 84.5 for a total score of 172, moving into third place just behind Grice and Kennedy-O’Brien.

Grice of Hunters Court Stable in Mount Pleasant, Tennessee took a moment to chat with us ringside about her win, “I’ve had High Life since he was six, he’s eleven this year. He actually won his first derby here at World Equestrian Center, so it’s fun to come back and be able to win again. He was just perfect today. It was really fun to cruise around on him.”

When asked about her plan in the handy round, Grice replied, “He’s very handy so I usually try to do all of the inside turns. There weren’t a ton of inside options, but after the trot jump line I was able to slip inside of the standards and stay on the inside track. We also went inside and caught a little gallop to the last jump.”

Grice also commented on High Life’s personality, “His name is Doobie, which really suits him. He’s very low key. He usually does the Amateurs but I got to show him this week to get him prepped. He is the class clown, he just wants to make you laugh. He’s so quiet, he takes minimal prep. We bring him right from the stall to the ring and kind of make it a surprise and he gets excited to be here. He’s really fun to have in the barn.”

Grice also added, “I own Hunters Court Stable in Mount Pleasant, Tennessee. We try to come to World Equestrian Center every Winter. It’s great to get the horses going at the first of the season. Hunters Court Stable was David Wright’s business. He passed away several years ago and I got to take on his position and keep the name of the farm, so it’s really special.”