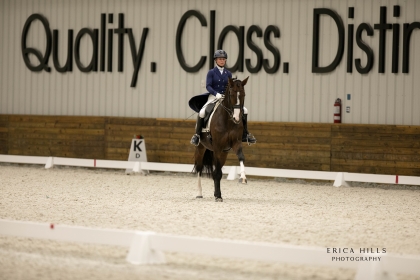 In their first competition together, Kane and Fling For U, a 12-year-old Swedish Warmblood mare by Blue Hors Don Romantic x OO Seven owned by Alicia Grace, scored 73.529% for the win. Grace purchased Fling For U less than two months ago and since she was unable to make the trip to Ocala, Kane took over the ride in the class.

“We love the horse,” said Kane. “It was very nice of her to share the horse with me. Walking through the barn, and yesterday when I took her into the arena, she was just checking everything out like, ‘Cool, cool.’ She’s very happy to be at the show and seems very cool with everything. She’s a fun ride. She’s definitely a mare. She likes her person and once she has her person, she’ll do it for you. She’s happy to do her work.”

It was an encouraging first start for Fling For U, and Grace will show the mare at Small Tour in the future. “The test was really great,” explained Kane. “I rode a little safe and went in to see how she feels, where she gets nervous or where she gets confused or backed off. She really didn’t, and she stayed with me really well. At the first halt, she looked up and I asked her to keep going, and she did. It was a nice ride.”

Kane competed at the April CDI at World Equestrian – Ocala and appreciates the opportunity to also bring horses to a national-level show.

“I have to say, all of the horses here really love the ambience of everything,” she remarked. “None of our horses are overwhelmed with it. They’re just taking it in, and if anything, they feel even better. The footing is riding really well. It’s soft, but springy, so it gives you what you really want to feel right before you go in the test. We love showing up here; it’s been really super.

“It is very nice to have national shows here,” she continued. “We’re talking with people in other parts of the country and the world right now and they’re so hot and humid and miserable. I said, ‘I’m going to go show in the air conditioning!’ It’s lovely. I have eight horses here. We will be back for the CDI in October for sure.”

Kane also appreciated the opportunity to stay directly on the horse show grounds at The Equestrian Hotel. “The hotel is really cool,” she said. “I was very impressed.”

Second place in the Open division of the FEI Prix St. Georges class went to Jill Hardt and Harmony Van’t Eusselshof, owned by Whitney Lawlor, with a score of 72.500%.

In the Adult Amateur division of the FEI Prix St. Georges class, Kristina Brown and her nine-year-old Lipizzan gelding Maestoso Belladiva took the top spot with a score of 66.618%. It was their first time competing at the Prix St. Georges level.

Brown bred Maestoso Belladiva, known as “Bill” in the barn; the horse is out of her Lipizzan mare Belladiva. She and Belladiva competed at the North American Junior Young Rider Championships, and Brown received her USDF Gold, Silver and Bronze medals and freestyle bars with her.

Originally from Nebraska, Brown grew up riding hunter/jumper and foxhunting. A trip to Tempel Farms for a Conrad Schumacher clinic as a 10-year-old horse-crazy girl exposed her to the Lipizzan breed. Her family purchased Belladiva as a three-year-old with just 30 days under saddle.

Bred to Hungarian Lipizzan stallion Maestoso Legeny, Belladiva produced Bill. “I’ve known him since he was a speck on an ultrasound!” said Brown. “It’s been a neat journey to bring him to FEI level. He has strengths that his mother didn’t have. It’s fun to see the different personalities and potential. Bill is very atypical type for the breed. The classical build is compact and short to do airs above ground, but Bill’s lineage is known to be a sport horse build. He’s 16.2 hands high and massive.

“He’s a good boy and excels in collection work,” she continued. “He’s getting a lot stronger. What he lacks in extended work is the big, flashy, forward movement that warmbloods have. Where he lacks, he makes up for in other parts of the test. [This was] a big atmosphere and change for him and his first time in FEI, so we can only go up from here. I’m really proud of him.”

Brown and her husband relocated to Ocala at the beginning of July with a massive road trip from Seattle, Washington, to fulfill their dream of owning their own farm and being closer to family and friends. Their six-acre farm is just 20 minutes away from WEC.

“We are excited to have WEC in our backyard and be so close to something so amazing,” said Brown.

Finishing in second place in the Adult Amateur division were Caroline Stevenson and Diane Morrison’s Dee Clair with 66.176%.