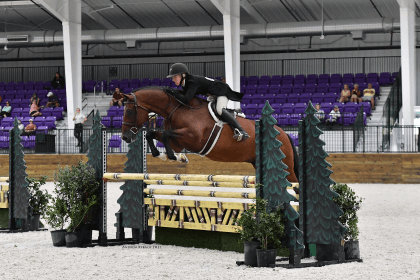 Week VII’s Derby Friday took over the CaptiveOne Advisors Indoor Arena as more than 45 horse-and-rider combinations challenged the $12,500 WEC Ocala 3’6”-3’9” Hunter Derby and the $10,000 WEC Ocala 3’ Hunter Derby. Doug Russell designed the winding tracks for both courses. The courses showcased inviting natural obstacles with three high options in each class. The handy round presented several options for tidy inside turns to show off athleticism and adjustability.

This afternoon’s $12,500 WEC Ocala 3’6”-3’9” Hunter Derby saw a field of 17 entries compete for the top prize with scores soaring into the high 80s and mid 90s, but none could best Dorothy Douglas and Abigail Davenport’s MTM Exceptional (Casall Ask x Rheinsberg). Douglas and MTM Exceptional had previous success in the class earning third place honors in last week’s 3’6”-3’9” Hunter Derby.

“I have been riding MTM Exceptional for about four years now. He is owned by Abigail Davenport from Devon, Pennsylvania. She either competes him in the amateurs or I steal him from her and I jump in the derbies. I am so used to doing sale horses, it is really nice to have one that I have had a relationship with for a couple of years,” said Douglas.

Douglas and the 12-year-old Holsteiner gelding delivered a flawless first round, completing all three high options to earn the classes highest first round score of 88.

Dorothy competed multiple horses earlier today in the $10,000 WEC Ocala 3’ Hunter Derby and took home second place and ninth place. “It was nice having two 3’ horses in the class before because I already knew how the lines rode and I knew where to go inside for the handy. At the end of the day, getting in the ring and jumping the same course always helps.”

Douglas and MTM Exceptional returned for the handy, cantering right from the gate to fence one. The duo landed to turn inside the tree for a perfect slice to fence three. They rolled to the double combination delivering another tidy inside turn back to the trot fence. Douglas and MTM Exceptional jumped the second to last fence with ease making for a perfect roll back to the final fence to receive a score of 90 for a total score of 178. Douglas was very proud of MTM Exceptional today, “I am so happy with how well he went today compared to the previous weeks. He jumped super well, was calm and was very careful.”

Tracy Fenney, who was the first and second place winner of last week’s $75,000 E-Z-GO Grand Prix and this week’s $15,000 WEC Ocala Welcome Prix, took home the third-place honors on MTM Last Word owned by MTM Farm. Fenny and MTM Last Word produced two impeccable courses, jumping all three high options in both rounds. The pair earned a first-round score of 80 and received the highest handy score of 93, for an overall total score of 173.

Earlier on Friday, thirty-one beautiful hunter horses took to the CaptiveOne Indoor Arena to contest the $10,000 WEC Ocala 3’ Hunter Derby but it was Isabel Harbour of Alpharetta, Georgia and her own Lost Art that claimed the top spot.

Harbour and Lost Art delivered a lovely first round taking all three high options to earn the class’s highest first round score of 89. Harbour is very happy with the 10-year-old Dutch Warmblood gelding, “This is Artie’s [Lost Art] first hunter derby win. He is super smart and super brave. He will do anything that you ask of him, even if it goes wrong. He is the perfect amateurs horse.”

“The last inside turn was tricky but as soon as I saw the distance to the oxer [fence 7] I knew he would be able to do the inside turn after it. I am so thankful for my trainer Terry Brown for pushing me to be tidy and be my very best each and every time I step into the ring,” expressed Harbour.

Tracy Fenney earned herself another third place finish today in the $10,000 WEC Ocala 3’ Hunter Derby aboard MTM Plus One. Fenney and MTM Plus One delivered a effortless first round course, taking all three high options to earn a score of 83. The pair returned for the handy delivering a foot-by-foot perfect handy round while completing tidy inside turns after each fence to earn the class’s highest handy round score of 91, for a two-round total of 174.