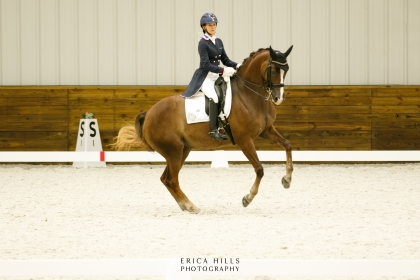 The FEI Grand Prix class was won by Jessica Howington and her own Cavalia on both Friday and Saturday. Howington and Cavalia’s first ever season competing in the Grands Prix qualified her to be on the short list for the Tokyo Olympics. They pair produced a flawless performance at the Adequan Global Dressage Festival (Florida) in the open CDI classes that notched the pair a spot on the 12-rider list.

Howington and Cavalia by Sir Donnerhall took to the Captive One Advisors Arena, late on Friday evening to contest the FEI Grand Prix. Howington and the 14-year-old KWPN mare scored a 72.609% to earn first. On Saturday the pair returned for another FEI Grand Prix scoring a 71.087% for their second Grand Prix win.

“Cavalia is amazing. She is ultra-sensitive and doesn’t like many people. She is very much a one-to-two-person horse, so she isn’t easy. I have owned her for about a year and half and we clicked immediately,” expressed Howington.

Howington will show Cavalia in the FEI Grand Prix and the FEI Grand Prix Special at the World Equestrian Center Dressage, IV CDI-W. Howington enjoys competing at WEC, “My first time at WEC was for the CDI [World Equestrian Center Dressage III competition] in April and I was amazed. The horses absolutely loved it. The stalls, the arena, the footing, the everything is just unbelievable. WEC is truly amazing.”

The Dressage XIV Show, held on Friday August 27 at World Equestrian Center – Ocala also hosted a very special ride. Jean Brinkman, who is 81 years old from Wellborn, Florida and Faithkeeper, her 21-year-old Trakehner mare by Martini out of Feadammee von Krotenbach, competed in the USEF Test of Choice class with the Prix St. Georges test. The pair received a score of 62.059% from the judge for second place.

But more than just their score, the ride earned Brinkman and Faithkeeper entry into The Dressage Foundation’s Century Club, in which membership comes form a combined age of at least 100 years old for horse and rider. The Century Club was established at The Dressage Foundation in 1996, at the suggestion of the late Dr. Max Gahwyler, noted dressage judge and clinician. The purpose of The Century Club is to honor senior dressage riders and horses that are still actively riding and competing. The Century Club has had 513 members since 1996; Brinkman and Faithkeeper will make it 514 members.

World Equestrian Center Dressage XV show began on Saturday, August 28, 2021, at World Equestrian Center – Ocala with a full schedule of classes, including the FEI Prix St. Georges in the CaptiveOne Advisors Arena, with wins for Devon Kane of Wellington, Fla., on Fling For U in the Open division and Kristina Brown of Ocala, Fla., riding Maestoso Belladiva in the Adult Amateur division.

In their first competition together, Kane and Fling For U, a 12-year-old Swedish Warmblood mare by Blue Hors Don Romantic x OO Seven owned by Alicia Grace, scored 73.529% for the win. Grace purchased Fling For U less than two months ago and since she was unable to make the trip to Ocala, Kane took over the ride in the class.

In the Adult Amateur division of the FEI Prix St. Georges class, Kristina Brown and her nine-year-old Lipizzan gelding Maestoso Belladiva took the top spot with a score of 66.618%. It was their first time competing at the Prix St. Georges level.

It was a nice return to the show ring for Holzer, of Wellington, Fla., and Havanna 145, who last competed at the World Equestrian Center Dressage III competition in April. Havanna had been working with her owner, but when Fellows was away for the summer, Holzer took back the ride. Holzer and Havanna, a 14-year-old Hanoverian mare by Hochadel x Rodgau, received a score of 72.391% in the Grand Prix.

Erin Brinkman and Fenomenal JW picked up their first FEI Intermediate 1 victory with a score of 74.118%. After a top-three performance in the Prix St. Georges at the U.S. Dressage Festival of Champions as a seven-year-old with Lindsey Holleger, Fenomenal JW made her way to Brinkman’s Valhalla Farm in Wellborn, Fla., in March 2021. Holleger is a former student of Brinkman’s, having won a USDF Gold Medal with a horse that is a half-brother to Faithkeeper, the mount that entered The Century Club with Brinkman’s mother Jean on Friday at at the World Equestrian Center Dressage XIV show.

Congratulations to all entries on a fantastic weekend of equestrian sport.

Join us for the WEC Dressage CDI competition: