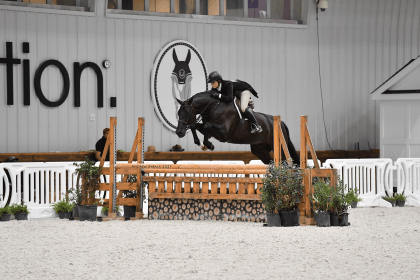 Today marked the final Derby Friday of the World Equestrian Center – Ocala NSBA Summer Series with more than 40 beautiful hunters vying for the win in the $12,500 WEC Ocala 3’6”-3’9” Hunter Derby and the $10,000 WEC Ocala 3’ Hunter Derby. Pat Muskus designed the winding tracks that featured stunning natural obstacles and forward lines that allowed riders to show off their horse’s brilliance and adjustability.

This afternoon’s $12,500 WEC Ocala 3’6”-3’9” Hunter Derby saw 16 competitive horse-and-rider combinations ride for the win with scores soaring high into the 80s. Hanna Toering and Lori Christman’s In The Black captured the win today, navigating two beautiful rounds. Toering has had great success during the NSBA-sanctioned WEC Ocala Summer Series earning multiple top three finishes in the 3’6”-3’9” Hunter Derby. “We love it here. The facility is just jaw dropping. We will never get tired of showing here.”

Toering of Waterford, Virginia and In The Black were on a roll today. “In The Black is such an amazing horse and I am so grateful to be able to show him in the derbies. My trainer Terry Brown has helped me so much and she teaches me something new every day,” expressed Toering.

Toering and the 11-year-old Westphalian gelding performed a lovely first round, jumping all three high options to earn a score of 76. Toering liked how the lines rode today, “ I thought the first round course was set very well. All of the lines flowed on a nice gallop which is perfect for In The Black because he has such a huge step.”

The pair returned for the handy, “I had to establish a nice pace early on to get a nice distance to the first oxer. After that I was able to ride two very well and wrap around to the trot fence. The log was nice as a trot fence because he studied it and was impressed by it which made for a beautiful jump. Then the rest of the course allowed me to really show him off.” Toering and In The Black jumped the last oxer perfectly to earn a handy score of 83 for a two-round total of 159 for the win.

McKenzie Clayton and her own Farcolle rounded out the top three in today’s $12,500 WEC Ocala 3’6”-3’9” Hunter Derby. Clayton and the 11-year-old Warmblood gelding delivered two beautiful rounds, earning a first round score of 77 and a second-round score of 80 for a total score of 157.

Twenty-six stunning hunters took to the CaptiveOne Advisors Indoor Arena this afternoon to compete for the top prize in the $10,000 WEC Ocala 3’ Hunter Derby but it was Erin McCabe Clayton and her new mount Milo that brought home the blue ribbon. “My plan wasn’t to show him this week, but I jumped him at home on Tuesday and I decided I wanted to try the derby because he was so much fun.”

Clayton has had great hunter derby success during the WEC Ocala Summer Series earning two 3’6”-3’9” Hunter Derby wins earlier in the series. Clayton and Milo navigated a flawless first round, jumping all three high options to earn a first round score of 85. “Milo is probably the most fun young horse I have ever shown. I just showed him in two classes yesterday and now we have won a derby!”

Clayton and Milo returned for the handy, “I had two plans going into the second round. As I was getting more comfortable going around in the handy, I decided to take a few more chances at the end. At first I wasn’t sure what I should do with him because this is my first time ever showing him in a handy.” Clayton and Milo produced an impeccable handy course taking a few inside turns toward the end of the track to earn a score of 83, for a two round total of 168.

Clayton praised the World Equestrian Center – Ocala venue, “WEC has the best facility hands down. We moved here three years ago specifically for WEC and it is even better than we imagined. There is truly no other place like it and I will show at every horse show here for the rest of my life.”

Third place honors went to Lauren Schweppe and James York’s Collins. Schweppe and the 11-year-old Warmblood gelding delivered two lovely rounds, earning the class’s highest first round score of 86, and a handy score of 68 for an overall score of 154 to earn third.