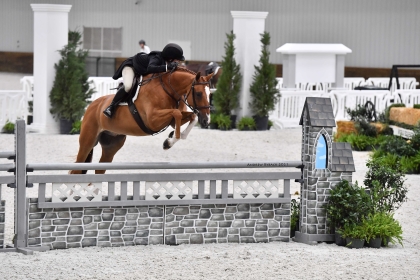 Another Derby Friday has commenced at World Equestrian Center – Ocala in the CaptiveOne Advisors Indoor Arena with 33 entries ready to contest the $12,500 WEC Ocala 3’6”-3’9” Hunter Derby and the $10,000 WEC Ocala 3’ Hunter Derby. FEI Level III and USEF ‘R’ rated hunter course designer, Peter Grant, designed the technical tracks for the day. The courses featured a myriad of natural fences with three high options and an inviting hay bale fence. Competition was intense in both derbies with scores soaring high into the 80s, but it was Jennifer Bliss of Loxahatchee, Florida that captured the win in both Hunter Derbies.

Jennifer Bliss and Harris Hill Farm, LLC’s Poker Face laid down a foot-perfect first round, only taking one high option to earn a score of 88. Bliss has owned the 16-year-old Dutch Warmblood gelding for quite some time, “We have had Poker Face since he was a freshly imported four-year-old. The plan was to develop and sell him, but he has totally become the family horse. He is my best friend,” expressed Bliss.

“He is so funny because you see him in the schooling arena, and he is going so slow. He is like a small pony that I can barley keep going. He is just like that at home too. He is such a show horse because as soon as he enters the ring, he grows somehow. He just turns into a different horse,” stated Bliss.

Bliss and Poker Face (Tangelo Van De Zuutheve x Nicolette V) returned for the handy course, taking tight inside turns after fence one, fence two, and fence three. The pair rolled through the rest of the course flawlessly, taking zero high options but still earning a high score of 88 for a two-round total of 176. “Poker Face is just amazing. He has done everything for me and is such a reliable partner.”

Bliss also found great success on her other mount Face The Music also owned by Harris Hill Farm, LLC, earning the second place finish in this afternoon’s $12,500 WEC Ocala 3’6”-3’9” Hunter Derby. Bliss and the 12-year-old Warmblood mare performed a magnificent first round, taking only one high option for a score of 85. “Kitty [Face The Music] is a bit younger and a bit greener than Poker Face. This is her first season doing the bigger derbies and we are very excited about her. She is a crazy talented horse that is brave and an amazing jumper.”

Bliss and Face The Music returned for the handy course, taking inside turns and forward distances with one high option to earn a second-round score of 86, for a two-round total of 171.

This morning’s $10,000 WEC Ocala 3’ Hunter Derby saw a field of 21 entries vying for the win, but it was Jennifer Bliss who captured the class, once again earning the first place prize.

Jennifer Bliss and Harris Hill Farm, LLC’s Sugarman started the class off strong, taking all three high options in the first-round to earn the highest-class score of 89.

Bliss wasn’t sure about her plan for the handy, “I went back and forth for what I wanted to do for the handy because he is so much fun that sometimes I can get a little ahead of myself and take too many risks. At the end of the day, it is a hunter round, so it has to be smooth. I tried to just make my plan based off what he could execute smoothly, being handy in the beginning then being more careful in the end,” said Bliss. Bliss and the 14-year-old Warmblood gelding came back for the handy, taking short inside turns with two high options, to earn a score of 83.75, for a total score of 172.75.

Devin Seek and her own Bugsy Malone (Casall x Gordela) were just behind Bliss and Sugarman. Seek and the 14-year-old Holsteiner gelding performed a lovely first-round, taking only one high option for a score of 88. The pair returned for the handy, taking an impressive inside turn to the trot fence while also completing two high options, for a handy score of 84.5, for a overall score of 172.5, just .25 points away from Bliss and Sugarman.

Caroline Searcy and Quality Road rounded out the top three in this morning’s $10,000 WEC Ocala 3’ Hunter Derby. Searcy and the Hanoverian gelding performed two stunning rounds, taking all three high options in the first round to earn a score of 86. In the handy round, Searcy showed off Quality Road’s adjustability while taking two high options to earn a score of 85, for a two-round total of 171.