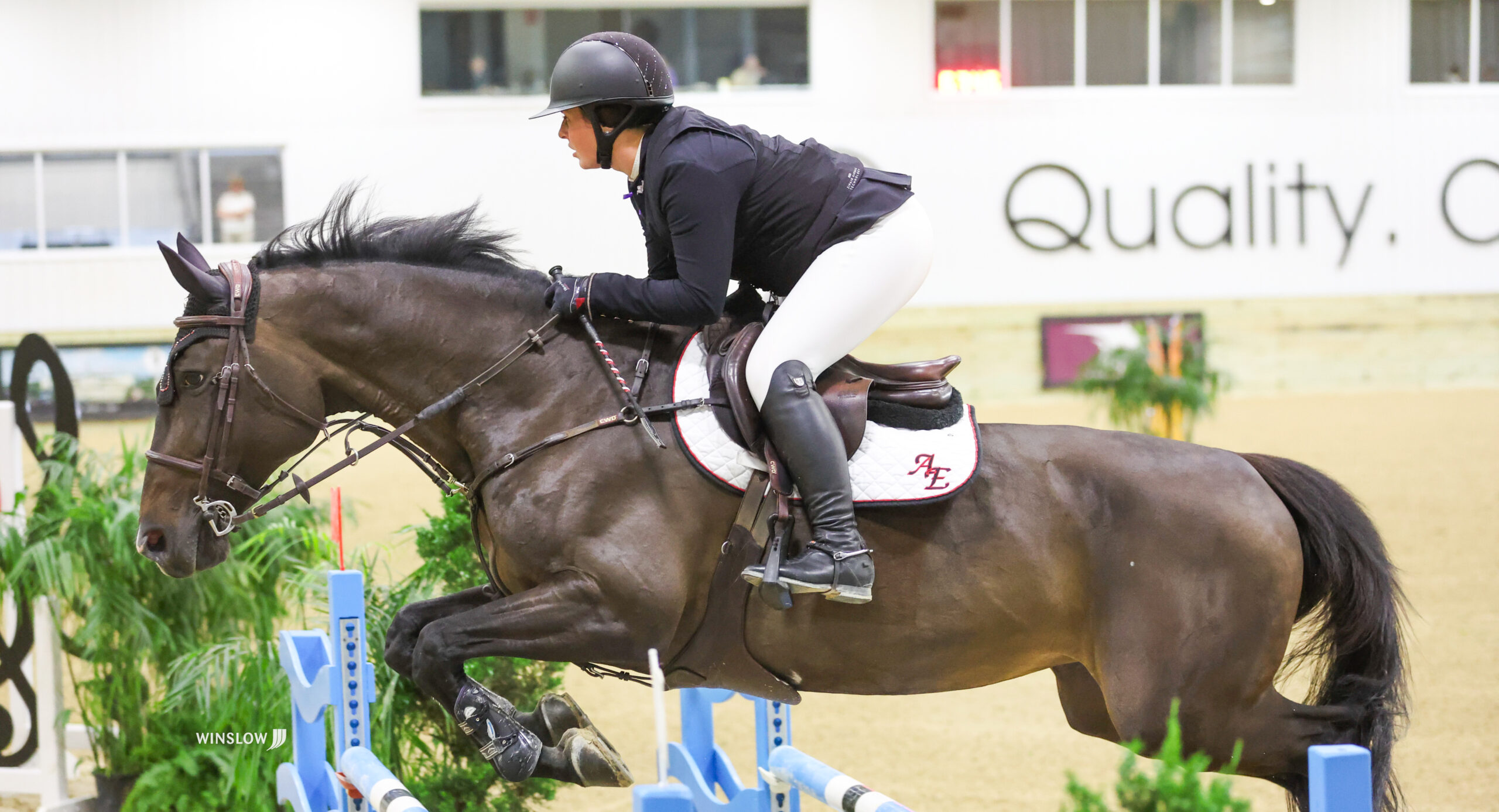 During the first leg of the $30,000 Grand Prix, completing a zero-fault first round quickly became a tricky feat for most riders. Just three of the twenty-two entries advanced into the second round, making for a quick jump-off.

“We came back after retiring at fence two last week. She just wasn’t feeling it and I didn’t want to push her. She gave me her all coming back this week and I stayed out of her way. She’s so fast in the air and I think that gave us the advantage.” mentioned Kady when asked about her winning ride.

Abrahamson skillfully rode the 15-year-old Mexican Sport Horse conservatively during the first round, ensuring to leave all rails up and stopping the clock at 77.813 seconds.

Abrahamson rode with a similar approach in the jump-off and was sure to remain soft and quiet throughout the course. Kady’s diligent efforts and smart riding was rewarded as the pair crossed the finish line at 39.414 seconds to secure the big win.

Second place honors went to Darby Pease of Windcrest Farm in Lexington, Kentucky, and Cumbaya W (Cabardino x Elena W). The speedy duo returned tonight after winning Thursday’s $10,000 Welcome Stake, hoping to receive a similar fate. Finishing the course only a tick under the winning time, they clocked in at 71.954 seconds during round one and 40.065 seconds in the jump-off.

Rounding out the top three were Sam Berry and Jarocco Blue. The pair delivered a flawless performance during round one, stopping the timers at 76.761. Later returning to tackle the short course, Berry and the gray Dutch Warmblood galloped to compete the course in 40.189 seconds, but received an unfortunate 8-fault penalty for fallen rails.

Darby Pease and Tyson Ziebarth’s Fenn claimed this afternoon’s top spot during the $10,000 WEC Futures Prix 1.35m. The pair bested a field of eleven and nabbed the win with a 1-second lead.

We chatted with Pease on her walk back to the stables, “I only started riding Fenn in March, so she is fairly new to me. She is the absolute fastest horse that I have ever sat on! Speed is her thing and that helped us greatly win today’s class.”

Next up in the lineup was tonight’s Grand Prix-winning rider, Kady Abrahamson, and Abrahamson Equestrian’s, Jazil Du Houssoit (Peppermill x Gerboise Du Houssoit). Abrahamson and the 7-year-old Belgian Spot Horse claimed second place honors with fault-free times of 74.776 seconds in round one and 33.139 seconds in the jump-off.

See you this summer! This sizzling spring and summer series brings you five weeks of USEF-rated hunter/jumper competition and more than $625,000 in prize money. Stalls can be reserved on horseshowing.com.