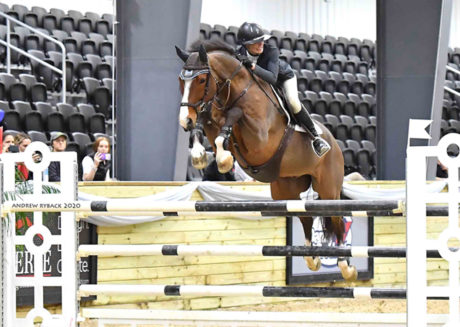 Spring has finally sprung in southwest Ohio and World Equestrian Center has taken full advantage by opening up the large doors to the indoor arenas and barns, letting fresh air and sunshine fill the facility. We kicked off Week 14 of ‘Winter in the Midwest’ this afternoon with an exciting $5,000 Welcome Stake 1.35m sponsored by CWD Sellier. Four entries managed double clear rounds, but it was Leann Kelly and Sarah Hunter’s Graf Joe (Graf Top x Aline) the nabbed the win with a one-second lead.

The course for this afternoon’s Welcome Stake was designed by Tucker Williams of getjumps.com and featured 14 jumping efforts including two one-stride combinations, adjustable bending lines and inside turn options on the short course. The pace setters for the class were Lauren DiTallo and Scott Durchslag’s Clash II Heldenlaan Z (Clinton x Lady Lightning Z). The pair have taken ribbons in Welcome Stakes and Grands Prix throughout ‘Winter in the Midwest’, but had yet to secure a top placing. DiTallo and the 10-year-old Zangersheide stallion managed a clear first round in a time of 75.657 seconds, well under the time allowed of 80 seconds. They continued straight to the jump-off of the Table II 2b event, keeping their pace and taking inside turns to fences 4, 5 and 14, crossing the timers at 40.794 seconds with a second clear round.

Next in the ring were Leann Kelly and Sarah Hunter’s Graf Joe (Graf Top x Aline). The pair took fifth place in the $25,000 World Equestrian Center Grand Prix just three weeks ago and were hungry for a win this afternoon. Kelly and the 10-year-old Hanoverian gelding navigated the fastest clear first round of the class in 70.506 seconds, signaling that they would be strong competitors on the short course. The pair continued straight to the jump-off, mirroring DiTallo’s inside turns and galloping through the timers at 37.559 seconds, a time that would prove unbeatable for the remainder of the class. Kelly returned later in the order aboard Jack Shainman’s Equinox HS (Ikoon x Tikina). The pair laid down a fantastic round in 74.126 seconds, but had one unlucky rail. Their quick time was still enough for a sixth-place finish.

DiTallo returned later in the order aboard Scott Durchslag’s Zero Gravity (Verdi x Releva). The pair earned a third place finish in the $25,000 World Equestrian Center Grand Prix one month ago and returned to the Sanctuary Arena this afternoon in hopes of another top placing. DiTallo and the 10-year-old Dutch Warmblood gelding jumped a clear first round in 74.336 seconds and advanced straight to the short course. The pair opted for the inside track, stopping the clock at 38.445 seconds and sliding into second place.

Not far behind DiTallo were Michael Kocher and Andrew Kocher’s Honfleur. The pair topped last week’s Welcome Stake and returned this afternoon to tackle the class again. Kocher and the 12-year-old Belgian Warmblood mare were quick in the first round, jumping clear in a time of 71.968 seconds. They continued straight to the jump-off, keeping their speed and hugging the inside track. The pair stopped the clock at 38.893 seconds, just behind DiTallo for a third-place finish.

Kelly of Winslow Farm in Valatie, New York stuck around after the awards presentation to chat with us ringside about her win in this afternoon’s class, “Riding Joe is always just so much fun. It really is just a blast – we are having fun out there. He likes to carry a pretty good gallop so we kept a good pace and pretty much just rode the course how it walked; he’s pretty accurate with his step. In the jump-off, the plan was to do the nine because he’s fast. Really, what did it for him was the fact that he can gallop right at a skinny and still leave it up.”

When asked about Graf Joe’s personality, Kelly smiled, “Joe just loves his job. We are always having a great time in the ring. He’s really enthusiastic and a lot of fun. He’s been through a lot and it’s been a long road back, so it’s very gratifying. He’s had several surgeries including a colic surgery, so there’s been many things along the way, but it’s well worth the wait.”

Kelly commented on her sixth place mount, Equinox HS, as well, “She’s a phenomenal young mare that we bought as a two-year-old. We broke her and brought her along. She tried her heart out this afternoon, she just got a little on my hand coming home and maybe a little tired.”

She also described the mare’s personality, “If she wasn’t gray, she would be the most simple horse I’ve ever had. The only complicated part is that she gets a bath in the morning. She’s just like, ‘Throw me a scoop of grain and bring me to the ring.’ I’m really so grateful to have both horses to show.”

Kelly also gave us some background on herself, “I’ve been in Valatie, New York at Winslow Farm for about seventeen years. My dad was a professional, my brother competes and my daughter is often at WEC competing, as well as my granddaughter. It’s definitely a family affair. I’m lucky enough to have a lot of really supportive people helping me do what I do.”

She added, “We do thoroughly enjoy every time we come to WEC. We try to come here every month for a couple of weeks. We’ve been doing that for years and we really appreciate the constant improvements. Every time we come here there is something new!”