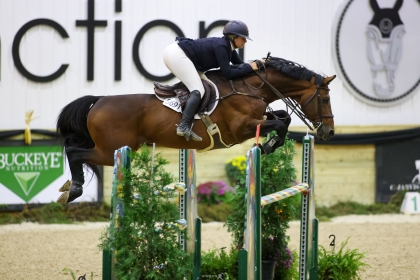 Wilmington, OH – National feature competition resumed this evening at World Equestrian Center – Wilmington with the $15,000 WEC Welcome Stake. Twenty-six starters gathered at the Sanctuary Arena to battle for the lion’s share of the prize money over tracks designed by Rob Barton (USA). Twelve horse-and-rider combinations managed to deliver a clean first round and eight jumped double clear, but it was Lisa Goldman-Smolen (USA) that secured the first and second place spots on the leaderboard.

Goldman-Smolen entered the arena early in the order aboard her first mount Sovereign (Frontal x Galledent) owned by Barbara Disko. Goldman-Smolen and the 16-year-old Selle Francais stallion navigated a stellar clear first round well under the time allowed of 88 seconds to qualify for the jump-off.

“I really hoped I would make it to the jump-off with Sovereign because I knew he would excel. The track offered so many options where you could stay out or take the tight inside turn, without it being too tricky to take a risk,” Goldman-Smolen voiced.

The pair advanced straight to the jump-off at the sound of the tone, “I knew I could do the inside turn after the World Equestrian Center jump if I could land and not fall off the back,” laughed Goldman-Smolen. “ If I just touch my inside rein, I knew he could make the turn easily no matter how fast I took the jump beforehand.”

The pair soared to the final fence stopping the clock at 32.365 seconds to hold the lead.

Goldman-Smolen returned later in the order aboard her second mount Ivaro N (Elvaro x Celli). Goldman-Smolen and the nine-year-old KWPN gelding owned by Barbara Disko laid down a second clean first round in 81.602 seconds.

The pair advanced immediately to the jump-off, “I planned to do the same track with Ivaro N that I did on Sovereign, but I wasn’t sure if I was going to go as fast. As soon as I picked up a gallop to fence one, I knew Ivaro N was all about speed today. I went a bit quicker from one to two on Ivaro N because I think that’s where I was a touch slow with Sovereign. Then I asked for a very tight turn after the dark blue vertical and Ivaro N was right there with me.”

The speedy duo soared over the World Equestrian Center oxer to land left and fly to the final vertical, stopping the timers at 33.327 seconds to slide into second place.

“I couldn’t be prouder of these two today and I know their owner Barbara Disko is even more proud. We have been traveling a bunch this summer showing at Lamplight and Traverse City. We did a few CSI3* competitions where both horses were always in the ribbons. They are just coming off a much-deserved three-week break, and they feel amazing,” said Goldman-Smolen.

Goldman-Smolen loves showing at World Equestrian Center – Wilmington, “We love the fall shows here. It’s so beautiful and has a great atmosphere. The decorations are top notch, and the horses love it,” Goldman-Smolen remarked. “I also wanted to make a big shout out to Hilary Dossett. It is her sweet sixteen today and she is always a great help at the barn. She also rode super well today and was in the ribbons. Happy birthday, Hilary!”

Tiffany Hammack and Foxwood Farm’s Ghana FS Z (Glasgow W VH Merelsnest x Uschi-Vira) rounded out the top three in today’s $15,000 WEC Welcome Stake. Hammack and the nine-year-old Zangersheide mare were the second pair to yield a clean first round in 86.199 seconds. The pair advanced straight to the jump-off dashing through the course while executing tidy turns in just 34.046 seconds.