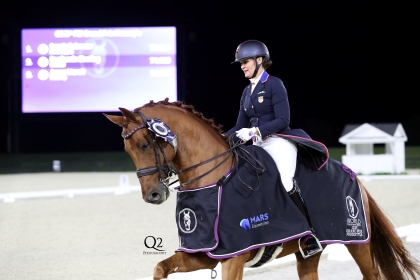 Tubman and First Apple led the field with a score of 75.665% with high scores from the judges in the two-tempis and in choreography. An addition of two-tempis on the diagonal was a gametime decision for Tubman, along with a third movement of piaffe, in order to increase the degree of difficulty.

Tubman worked on relaxation with First Apple earlier in the day as well as in their warmup for the freestyle, and the plan worked.

“He gave me a super feeling in there,” she said of the 12-year-old KWPN stallion by Vivaldi x T.C.N. Partout owned by Summit Farm. “It’s a really exciting time because I feel like he’s becoming more and more of a confirmed grand prix horse, and I just have to trust that. It’s a great feeling because he really lights up in there in a really positive way, and I also think that he absolutely loves cold weather.”

Tubman appreciated the opportunity to show in the WEC Stadium Arena. She noted, “I love that they can move us to different arenas at this facility because the more chances we have to show our horses different environments, the better.”

Tubman and First Apple, along with husband and trainer Lee Tubman – the couple got married at the WEC – Ocala chapel in December 2021 – took the horse back to the basics nearly two years ago in order to work on the movements for the grand prix level after winning team silver and individual gold medals at Small Tour in the 2019 Pan American Games. Along the way, Tubman has been learning as well, as her first CDI grand prix freestyle was only this past March. In the past two months, the pair has won five of the six classes they entered.

“We started two years ago, and it was very difficult,” said Lee Tubman, who is a four-star international dressage judge. “He was a small tour horse, and there was a thought that you could go from small tour to grand prix in a matter of months, and you can’t. That was unfortunate, because that kind of delayed the progress and made it difficult for him and for her. It was very difficult for us all together because there was a significant amount of pressure on her to be successful coming off of Pan Ams.

“It took a while, but this is a fantastic bond between the three of us,” added Lee Tubman. “For me, life can’t get much better. I’ve always wanted a partner like her to be able to do things like this and be successful. She’s the person to be successful with. She has what it takes to go in there and create that kind of a performance. I just have to keep her calm and tell her a few important things once in a while.”

“It’s really fun to be able to do this together,” affirmed Sarah Tubman.

In her first time at World Equestrian Center – Ocala and in her mount’s first time competing the Grand Prix Special at a CDI, Emily Miles of La Cygne, Kansas, rode to the top of the leaderboard with a score of 68.404%. She and Java Dulce, an 11-year-old Danish Warmblood gelding by Jazz x Deemster owned by Leslie Waterman, led the lap of honor. Mikala Münter (USA) and Salsa Hit placed second with 67.532%, while Chase Shipka rounded out an all-USA female podium riding Gladstone Zee T to 67.128%, a personal best.

“He is wonderful because he has such a big gas pedal,” said Miles of the horse she’s ridden for eight years. “Yesterday I rode a very clean test, but it was reserved. Today everyone was like, ‘You have to go in there and ride him like he knows his job because he knows his job now.’ It was wonderful for me. I was thrilled that he rose to the occasion. I love that even when we added that little oomph, he still stayed so rideable for me.”

In addition to Java Dulce’s win, Miles also met another career milestone as she rode Daily Show in the Developing Grand Prix class, making him the seventh horse that she has produced from a baby to grand prix level.

This was Miles’s first time at WEC – Ocala, and she was impressed with the facility. “What a wonderful venue and opportunity for the dressage community to be able to use a place like this,” she said. “It’s intimidating at first, but once you get used to it and you familiarize yourself with it, it makes sense.”

It was a major undertaking for Miles to make the 20-hour trek from Kansas and it was a major family effort, she noted. Her mother and main trainer, Jana Wagner, drove with her and the horses while her sister, husband, and groom held down the fort at home. Miles thought Waterman’s horses deserved to be shown, and she needed to “get out of my comfort zone.”

She added, “We thought we would come here and then go home and see what we need to work on. We would see where we stand, and I would put myself in a big atmosphere.

“I don’t want to forever be a big fish in a small pond,” she continued. “I have big dreams, but it’s always kind of intimidating. To be able to come here and one, have the support, and two, be able to hold my own, was fantastic. I’m just really thankful for everyone that helped make that happen. I hope that I show I’m appreciative, and it’s realized that I don’t take any of this for granted. This is a little girl’s dream; how could it be me? But wow, I’m here. Pinch me. Maybe it will set in later!”

Earlier in the day, Anna Marek and Duvel, owned by Cynthia Davila rode to another Small Tour victory, this time in the Intermediate I CDI3* with a score of 69.020%. Tina Konyot (USA) and J Everdale, owned by Konyot and Earle I. Mack LLC, won the Prix St. Georges CDI1* with 68.676%.

The World Equestrian Center November Dressage CDI3* continues on Saturday, November 19, with the Intermediate 1 CDI1* at 9 a.m. followed by the Intermediate A CDI3* at 10:20 a.m. and more classes for juniors, young riders, and amateurs. For more information, visit www.wec.net.

The 31-year-old professional originally from Pittsburgh, Penn., started riding at eight years old in dressage and moved to Wellington, Fla. at age 12 to “continue my equestrian education.” After winning team and individual silver medals at the FEI North American Junior/Young Rider Championships, she completed a Bachelor’s of Science degree in Psychology. She turned professional at the age of 21 and has been building her business ever since. At the World Equestrian Center November Dressage CDI3*, she and Amadeus de Massa, a 12-year-old Selle Francais gelding by Fürst Romancier x Mulato HB, placed second in the Intermediate 1 CDI3*.

When I was eight years old, there was a horse trailer in front of my house in Pittsburgh. I hadn’t really found a sport that I liked, but I knew I always liked horses. The trailer belonged to Dana Fiore, who shows at WEC and Wellington. Dana was the reason I got started in dressage because I saw her horse trailer in her driveway.

I’m a perfectionist, and you always want to improve something. There is always something to finesse and make better, and I’m like that in my daily life, so dressage kind of fits.

How did you find Amadeus?

Caroline Roffman called me and said, ‘Hey do you trust me? I have a horse for you.’ I saw a video and said, ‘Let’s vet him and bring him over.’ It’s been really a fun experience. I wasn’t really expecting all of this from him; this is kind of a dream come true. For all this to come with a horse I’ve only had for a year – our first horse show was a year ago in November – he’s just a gem.

What do you love most about Amadeus?

His personality. He is my dude. You never have a bad ride when you ride Amadeus. It’s always, ‘Ok, let’s go have fun.’ He never says no. He’s a worker, and he’s my teammate; he’s my best friend. He has a lot of nicknames. Everyone knows him as “The Marshmallow.”

What is your impression of World Equestrian Center – Ocala?

This is my second CDI, and I’ve done two national shows here. I love the dressage shows here. Everything is laid out well. The footing is amazing. I love that you can go into CDIs in a bigger atmosphere. It’s good schooling and education for me because I’ve never shown in arenas like this. It gives me confidence, and it gives my horse confidence. It’s really well run, and everyone does a great job.