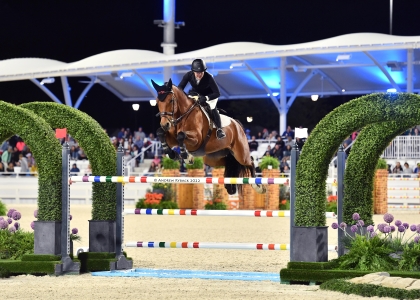 This week’s Sunday Spotlight shines on Bryn Sadler of Ocala, Florida. Sadler has been competing at World Equestrian Center – Ocala for the 12-week Winter Spectacular Show Series, earning numerous top finishes in featured classes. We caught up with Sadler to discuss her riding career and competition horses.

I have five older siblings that all used to ride, and I was the youngest of our family, so I was put on a horse as soon as I could walk. I did everything from leadline, short stirrup to small ponies, it was the whole shebang.

I took classes online in high school and got into riding seriously when I was about 13-years-old. I did hunters and equitation until that age but moved over to jumpers because my brother who was slightly older than me would always beat me. He looked so nice on every horse, that no matter what I did, he would still win. So, I switched over to jumpers and never went back.

I am the only rider left in my family. We had 28 horses between all my siblings when I was younger. When I was 14 years old, all my siblings had stopped riding. I ended up inheriting the horses which was beneficial for me, because all of the horses had unique ways of go that I wasn’t used to, so I learned so much.

We were based in Tennessee where we shared a farm. At that time, we still owned a lot of horses and wanted to downsize. We sold a bunch and moved to Florida when I was 16-years-old. We owned a farm about 20 minutes from here, and I trained with Sharn Wordley.

About 11-years-ago we moved to the farm that we are at now, which is a bit closer. So, we have been here for quite a while. We watched World Equestrian Center – Ocala being built. We were unbelievably excited. We wanted it to be open as fast as possible. It’s amazing, we show here in the winter, summer and fall. We rarely ever travel anymore. My parents love it, they can sit in the shade, watch and get something to eat. They love bringing their friends to come watch, honestly it feels like a vacation here.

We used to do training as a mass production, but it was very difficult to operate at a higher level and we weren’t large enough to run an operation like that. So, we slimmed it down to six horses max. That’s the number of horses that we can produce and focus on really well.

At Showcase 81 we never have horses for less than a year. We want to put in a significant investment and have the horses performing significantly better. We plan on keeping the horses for life. If the horse ends up selling, it’s because we have found a perfect match.

WEC: Tell us about your competition horses.

We currently have our lightest pack of horses. We only have four show horses right now. The one Cinven CR, who is taking a bit of time off, but he will be back very soon.

Catch The Dollar, I have had for about a year now. I think he’s going to do some serious business. He’s phenomenal. I bought him and Cinven CR through Kristen Vanderveen. I love Catch The Dollar’s ride. We did the $200,000 on Saturday, and he was amazing. It was a difficult track and he jumped it with ease. He’s a methodical, big horse, he likes everything planned out and I liked everything planed out, so we work every well together. He’s lighter than you would think he is, but he has endless scope. He keeps the rhythm for you but would rather be slowing down to the jumps than running at them.

Cezarro I have owned for seven years. He’s like a child/adult jumper, you go into the ring to win every single time. At no point do you walk in for a warmup. It’s so much fun. He’s probably a solid 1.40m horse. He does have a great mentality, because he will not say no. I describe him as a Jack Russell, you send him after a moose and he’s determined to get it.

Radioactive is a younger horse that I got through Lisa Goldman-Smolen. She’s one of Lisa’s homebred horses. She’s a bigger, lankier type, that I love. Lisa didn’t like her style, so we traded horses, she got one of my junior/amateur horses and she gave me Radioactive. I think we both go the better end of the deal on that one.

Radioactive is such a good girl. She’s only eight, and I have been taking my time with her. We are stepping into the high classics now, which is 1.45m. She’s extremely brave and super smart. You can feel her think. If you push her to the base of an oxer, she will adjust to the next fence. She never takes things personally and loves her job.

Back at home we have two retired horses, my sister’s old dressage horse that her kid now rides once in a while and my old grand prix horse who is now 25. We do have a horse named Bon Giorno who is currently leased out, doing the low child/adults, because we tried to retire him, but he was miserable. He would scream when we left with the trailer, because he knew we were going to a horse show.

Now that the winter series is over, all my horses will get about three weeks off and go graze in the paddock. Then we will start to get them back in shape for the WEC Summer Series!

Thank you, Bryn, for taking the time to speak with us! We can’t wait to see you again soon for Summer Series.