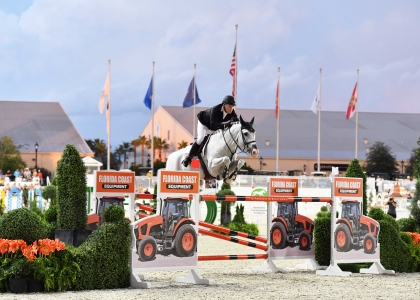 Ocala, FL – World Equestrian Center – Ocala is switching focus to a beloved equine athlete for this week’s Sunday Spotlight. Gatsby, owned by Olympic rider Sharn Wordley of New Zealand has become a fan-favorite during the Saturday night grands prix and Wordley says, “the Grand Arena is his favorite.” The 18-year-old Irish Sport Horse stallion rises to the occasion every time he enters the WEC Grand Arena, and he has secured over 15 top-three placings at World Equestrian Center – Ocala. We caught up with Wordley to learn more about his veteran mount.

WEC: How did you come across Gatsby?

Gatsby was originally from Andrew and Richard Bourns of Bourns Sport Horses in Ireland. He did very well with Andrew winning the Bromont World Cup™ Qualifier and Hermès Jumper Derby in Wellington, Florida.

Then, the Bourns sold him to Darragh Kenny’s client Alison Toffolon where he had many wins at the international level. Darragh also won the World Cup™ in New York on Gatsby.

When Alison was ready to sell, she sent him to me. He came with a minor injury, so I rehabbed him and when he was ready, I got him fit. I took him to a horse show where I showed him in the 1.30m and I fell in love immediately, knowing I had to buy him for myself. Right after that show we went to do our first grand prix together and we won. He’s been winning prize money ever since.

WEC: What is Gatsby’s personality like at home and in the show arena?

He has the best personality. He always has his ears perked forward and is eager to do whatever we ask of him. He’s such a well-behaved stallion. He never makes a fuss and doesn’t have any issues with ground manners. He goes on the treadmill and walker, then goes out in the field like a perfect pony.

Gatsby is always the same at horse shows – he never fluctuates. He knows his job and he likes the competition. He always feeds off the crowd and rises to the occasion. Each time we step into the ring he gives me one hundred and fifty percent of what he has that day and even though I have been riding him for almost seven years, I’ll never get tired of showing him.

WEC: Do you have a favorite memory with Gatsby?

It’s hard to pin-point a certain memory, because they have all been so great. I know Gatsby loves the Grand Arena. He thrives in the Saturday night atmosphere and loves the crowd cheering him on. It’s always a special feeling to win a grand prix at his favorite venue.

WEC: What’s next for Gatsby?

He’s going on 19 years old, but he feels just as amazing as the first time I showed him. I am a bit more conservative with him in the jump-offs because he is older, but I know if I asked for all of him, he would give me even more.

This past Summer we showed at WEC, and he racked up numerous top three placings feeling incredible. We went to Tryon too where he ended second in the FEI Qualifier.

I am excited to show him here this Winter and make a few Saturday night appearances. I am going to let him tell me when he’s ready to retire, because right now, he feels incredible and he’s not slowing down one bit.

Thank you, Sharn, for taking the time to chat with us about Gatsby! We look forward to cheering you both on during the Saturday night grands prix!