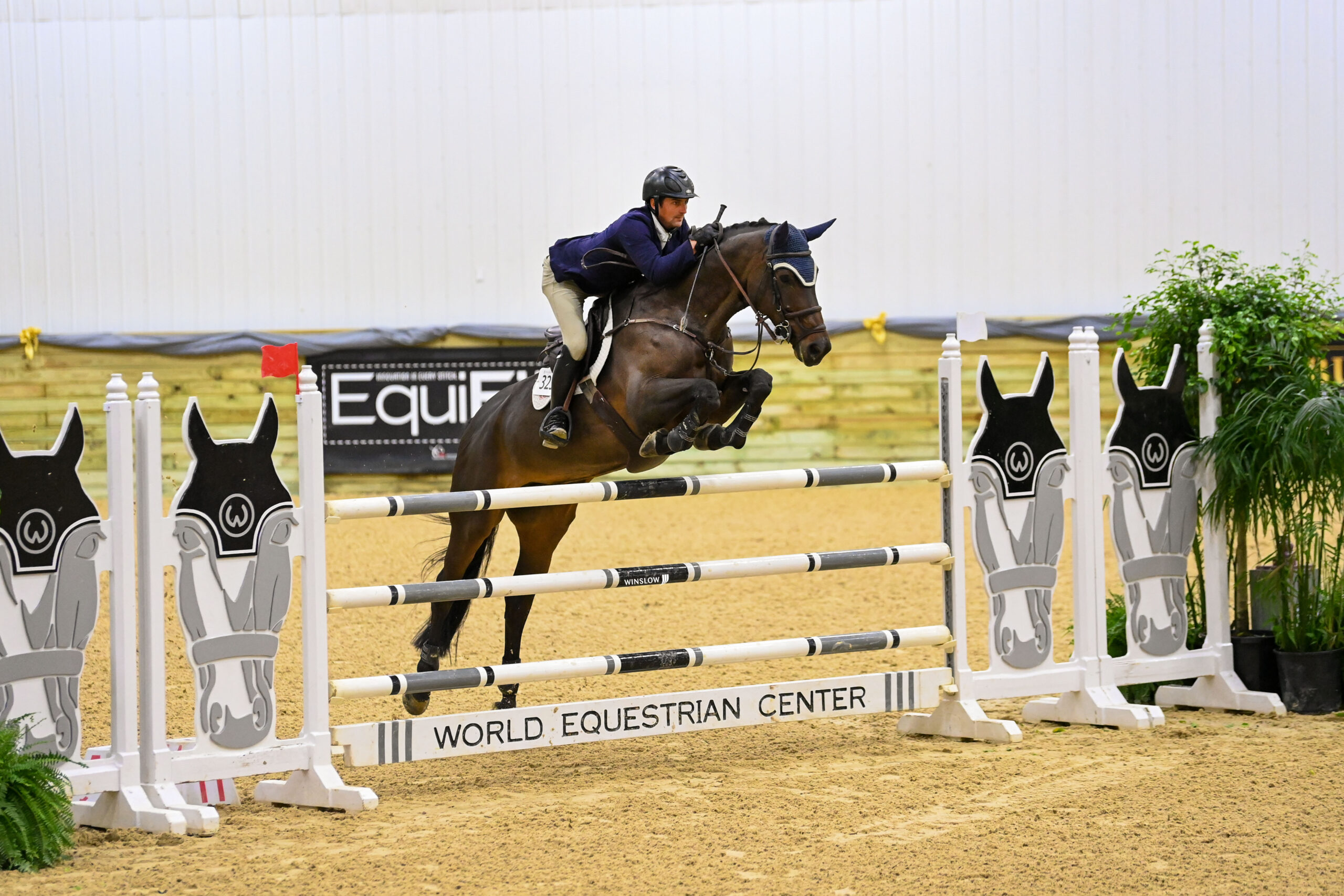 Wilmington, OH – Week XV’s WEC feature classes launched with the $10,000 WEC Welcome Stake 1.35m in the Sanctuary arena. Micheal Pegg (CAN) built the sinuous tracks that allowed five entries to produce a clean first round and four to ride clear in the jump-off.

Second to last in the order of go and producing two blazing fast and clear performances was Sam Pegg (CAN) and Caroline Eracles’ Gluckskeks (Gem of India x Calido). They ultimately climbed to the top of the leaderboard, knocking Charlotte Clark and Kinsella out of the lead.

The eight-year-old Holsteiner mare has been under Pegg’s guidance for several years now. We caught up with Sam to chat about the gifted mare “I’ve worked with her since she was six and her career has been extremely successful every step of the way. Now that she is eight, she is beginning to jump her first grands prix. We are having great results with her. Her form and technique is unbelievable and she is so consistent.”

Pegg (CAN) and Gluckskeks were the thirteenth pair to contest today’s tracks, where they jumped the qualifying first round in 78.628 seconds. The pair advanced straight to the jump-off, making tidy inside turns and leaving room to spare over each jump for a final finishing time of 42.437 seconds to take home the $10,000 Welcome Stake win.

“Gluckskeks jumps clear 99% of the time and she is starting to learn speed. As far as the course goes, I may be a little biased. My brother built today’s course and generally speaking, his courses are flowing and they promote horses to jump better throughout the week and even from one week to the next. If he is at a show for several weeks, he helps you leave with a better horse by the end of it.” Pegg added.

Standing in second place were crowd favorites, Charlotte Clark (USA) and Kinsella. The red-beauty, Kinsella, a 12-year-old chestnut Irish Sport Horse mare, is a longtime ride of Clark’s. The veteran team has procured a long list of accomplishments at WEC and continues to top each class they enter. Today they finished with a time of 73.491 seconds in the qualifier, and a 43.664 second, red ribbon finish in the jump-off.

Standing in second place were crowd favorites, Charlotte Clark (USA) and Kinsella. The red-beauty, Kinsella, a 12-year-old Chestnut Irish Sport Horse mare, is a longtime ride of Clark’s. The team has procured a long list of accomplishments at WEC and continues to top each class they enter. Today they finished with a time of 73.491 seconds on the short course, and a 43.664 second, red ribbon lead in the jump-off.

Rounding out the top three was Sam Pegg riding Beth Underhill’s Pacifica. Pegg and the eight-year-old bay Warmblood completed round one in just 79.893 seconds. They directly advanced into the jump-off where we saw a final time of 44.620 seconds for third place honors.