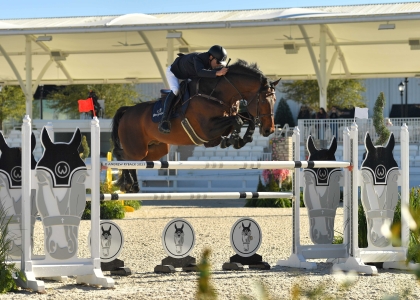 Eight of the 20 horse-and-rider combinations successfully completed the first round with all rails up and under the tight time allowed of 79 seconds. Six of the advancing entries produced a double-clean effort.

Santiago Lambre was the pathfinder for the class aboard his first mount Nono VD Withoeve  (Elvis Ter Putte x Chellana I Z) owned by All In Horses and Jan De Waard. Lambre and the ten-year-old Belgian Warmblood stallion found a clean jump-off in 35.037 seconds to set the pace.

The next three to advance to the jump-off gave the short course their all, but none were able to keep all the rails up and beat Douglas and MTM Cedrik’s quick time.

Daniel Bedoya came close to the time aboard Jumpstar Uno owned by Monica Hanks, after the pair took tidy turns and left out strides, but stopped the clock just behind the winning pair at 33.492 seconds.

Santiago Lambre found one more clear round aboard the exceptional 16-year-old Oldenburg stallion Chacco Blue II (Chacco-blue x Naiti Rouge). “This is his first show of the year. He had four weeks off of showing, and jumping. We focused on a lot of flat work to keep him fit and it paid off because he felt great. Next week, I will show him in the grand prix to prepare him for the five-star in Wellington in a few weeks,” stated Lambre.

Lambre’s original plan was to take it a bit easy in the jump-off, but Chacco Blue II had a different idea, “I really wasn’t going to go that fast and use the track for more training purposes, but Chacco Blue II has such a big step and he was pretty eager, so I just let him open up. I practiced a few tidy turns and ended up doing eight in the last line, but I think I could have gotten the seven because I had to make him wait for the eight,” laughed Lambre.

The pair galloped around the short track easily, leaving out strides to stop the clock at 31.571 seconds to secure the lead.

Lambre was complimentary of the week’s courses, “The courses all week have been great. Ben Townley is an incredible course designer and he set a lot of challenging elements this week which was great practice. The grand prix last night was excellent, and the courses today were perfect for the green horses and horses that are getting ready to do the Saturday night classes.”