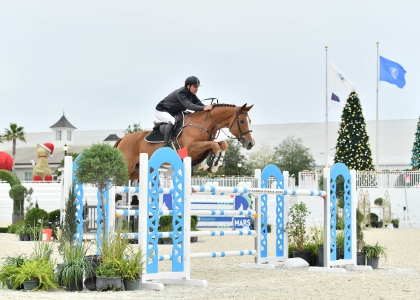 Lambre and the nine-year-old Belgian Warmblood stallion yielded an effortless first round in 82.679 seconds to qualify for the immediate jump-off.

Nono VD Withoeve is a new mount for Lambre, “’Nono’ just arrived this week. This was our first show together and he’s proved himself to be very careful. I showed him the last three days and he hasn’t touched one fence. He’s still a little green, but I think he is going to be a very competitive horse.”

The pair advanced straight to the jump-off, “I liked the jump-off. I didn’t have to run because the track offered a few options for tight turns.” Lambre and Nono VD Withoeve soared around the jump-off track in 36.616 seconds to ultimately secure first place.

Aaron Vale and Thinkslikeahorse’s Cargolot PS (London x Paragona) found the second-place finish in today’s classic. Vale and the eight-year-old Warmblood gelding produced a smooth first round in 84.145 seconds to advance to the jump-off. The pair dashed around the short track, taking tidy inside turns to stop the timers at 36.748 seconds, just one tenth of a second behind Lambre.

Just behind Vale and Cargolot PS was Chloe Reid and Live Oak Plantation’s Chelsea 179 (Candor 5 x Laudana). Reid and the seven-year-old Oldenburg mare delivered a speedy first round in 77.760 seconds, well under the time allowed of 87 seconds. The pair advanced straight to the jump-off flying around the track to stop the clock at 36.764 seconds to round out the top three.

Congratulations to all competitors on a successful week of equestrian sport! We hope to see you all back soon for the final two week of the 2022 USEF Fall Show Series starting December 7.