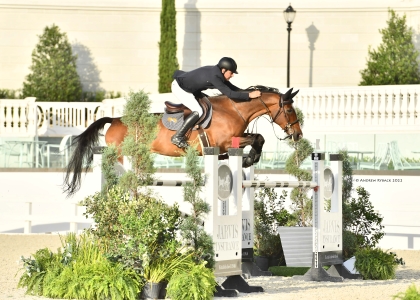 Lambre and Comtess 202 (Comme II Faut 5 x Parodie) were the first combination down the ramp into the WEC Grand Arena, delivering a flawless first round in 75.492 seconds. Lambre is no stranger to World Equestrian Center – Ocala earning a multitude of top placing during the 2022 Winter Spectacular Show Series.

Lambre is looking forward to the rest of the 2022 USEF Summer Series, “I am very excited that WEC is hosting USEF and FEI competition. I will be here for the entire nine-week circuit. I have an exciting string of horses with me and a few new additions, so I am thrilled to have started on a strong note.”

Lambre and the 11-year-old Westphalian mare advanced straight to the jump-off, “Comtess 202 is an extremely careful horse. I was the first one in, so I probably took a few too many risks, but at that point I wasn’t sure how fast the rest of the class was going to be.”

Lambre and Comtess 202 started on a strong gallop to fence one to land right and roll to fence two. The pair walked down the line in six strides, landing left to slice the large red oxer. Lambre and Comtess 202 navigated the combination to streamline to the C. Jarvis Insurance oxer to stop the jump-off clock at an uncatchable 35.915 seconds.

While other horse-and-rider combinations took to the course, most fell fault to rails and time penalties. Lambre returned on his second mount, Dingeman (Nintender x Jolanels). Lambre and the 14-year-old KWPN gelding delivered a clean first round in 75.100 seconds.

“I knew that there was only one other rider clear, but had a rail in the jump-off, so my goal was to keep all the rails up and not take as many risks as I did with Comtess 202,” stated Lambre. The pair soared around the course, not touching a single rail to stop the clock at 36.709 seconds.

Nicole Velazco Magana (MEX) and her own Daddy’s Destiny (Comme II Faut 5 x Acasino B) found the perfect track in the first round, leaving all rails up in 73.554 seconds. Magana and ten-year-old Oldenburg mare advanced to the jump-off, racing through the course to stop the clock at 39.659 seconds, with one rail down to ultimately round out the top three.