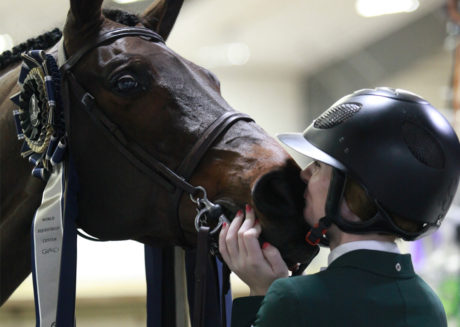 This week’s Sunday Spotlight shines on Emma Green of Caramel, Indiana. Emma and her four talented mounts are taking on nearly every ring, from the jumpers, to the hunters, to equitation and even dressage with the help of her trainers Michael Burnett and Tina Yates. Emma has big plans to move up to the U25 this year with her jumper, and even higher aspirations to acquire her course designing license in the near future. Emma took the time to chat with us this week and tell us about her hopes for the coming year and her beloved horses.

Emma: When I was little my family used to go to the 4H fair that we had in town and I just always loved the horses. I started riding at a little western barn. When I got my first pony he didn’t really fit in with the western show horse crowd, so I started taking him to hunter/jumper shows. It all evolved from there.

I have a super horse that was my equitation horse named Hennessy, or Chip in the barn. I got him about seven years ago. We bought him to do the international derbies and the equitation, but he became my Junior Hunter, and we did all of the finals together. Now he does the amateurs with me. Chip is a diva. He thinks that he is the center of attention all of the time. He wants everyone to pay attention to him and he’s constantly hungry and looking for snacks. He thinks that he is the greatest thing on earth.

I also do dressage on Viva Las Vegas, or Vegas. We originally did the Small Junior Hunters, the equitation and the derbies, but we’ve switched him to being a dressage horse. We are getting ready to do the U25. Vegas is very quiet. We call him a cat because he’s quiet and a bit reserved. It’s his way or the highway.

I also have a horse named Pis Aller, or Chacco, that I bought to do the USET on. He is now a jumper. He’s ready to jump the 1.30m. He’s a bit younger and green. He’s a big horse, too, so it’s taken a lot to develop him. When he got imported he was very afraid of people and not very trusting of anyone. I think he may have had a little bit of abuse in his past. He has slowly become the biggest, bubbliest horse. If you walk into the barn at four in the morning he is standing there looking for you. He just wants to be around you and play with you. He is by far my favorite (don’t tell the others).

I just got a new horse in Florida named Clinton. He was jumping the U25 a Spruce Meadows and all over the west coast. He is really my horse to be able to step up on. Clinton is the quietest horse. We can put beginners on him and go on trail rides. I’ve even taken him out with cows. He’s just perfect.

WEC: How did you get into Dressage?

Emma: Vegas had a one inch bone spur that came off of the back of his cannon bone when he was a hunter. We didn’t realize that he had it until the vet found it. The vet did experimental surgery to remove the bone spur because it was going through his tendons. Vegas came back at 100 percent. As soon as he cam out of surgery he was great. He was always a little bit of a hot type of hunter, and we didn’t want his work to be so hard on his leg after his surgery, so a good friend of ours took him for a bit to work with him while I was at equitation finals. He was being a little obnoxious when he came back from surgery. He was a challenge to even got on, he liked to run away when you try to get on him. So, our friend was working with him and she thought that he would make a great dressage horse. He’s actually a half brother to Steffen Peters’ Olympic horse. We decided to give dressage a shot, and within two months our friend took him to Regionals and was Reserve Champion. She took him to Finals after that. He really seemed to enjoy dressage, so we decided to continue with it. It’s only been three years now, and he’s working on the Grand Prix. He’s kind of a natural at it.

WEC: Tell us about a memorable experience that you’ve had with your horses.

Emma: My last junior year we were doing the Chicago hunter derby and I was Reserve Champion in the International Derby Welcome. It was so special because the class went on grass. We don’t get a lot of opportunities in the hunters to show on grass in the Midwest. I worked really hard with Chip to try to get him used to going on grass because he used to be very bad on grass, he wouldn’t carry himself well. I worked a lot on conditioning on the grass field at the barn. We walked in the class on day one and scored an 86 and placed second against all of the pros. It was pretty special. He’s such a great horse.

WEC: What do you do outside of riding?

Emma: I’m a senior at Indiana University, and I do their online program so that I can travel and horse show. I’m a criminal justice major and a political science minor. My aim with that was law school, but horses are more of my interest than law school. It’s kind of my backup plan.

I also do Pilates and crossfit every day to keep me in shape for riding. Riding really consumes my life. I do enjoy working out, but it’s mostly for riding.

WEC: What are some exercises that have helped you with your riding?

Emma: I do Pilates online from Pilates Core Arena. She’s super, she trains all of the top riders. She does online classes every day, so I really enjoy that and I think it really helps with your core strength. I have very strong horses to ride, so I work a lot on arms. I also broke my collar bone last fall, so I’ve done a lot of shoulder rehab.

I’m very excited to go to Capital Challenge at World Equestrian Center with my hunter!