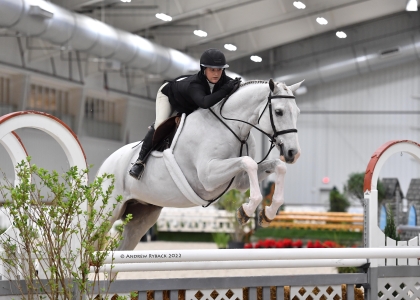 Competition was fierce in the $12,500 WEC Ocala 3’6”-3’9” Hunter Derby with scores soaring into the 90s, but it was Taylor Ann Adams and Donald Stewart’s Starfighter (Stolzenberg x Caliku) that laid down an impressive handy round to wow the judges.

Adams and the 10-year-old Hanoverian gelding navigated a seamless first round to secure the class’s second highest score of 90.

Adams knew she couldn’t play it safe for the handy round, “Sam Schaefer and I have been competing against each other for 20 years. I know she is a true competitor, and I was going to have to pull something off in order to win.”

Adams was the first competitor of the day to try a tight inside turn to the double combination, “I asked Colin what I could do to really show off, and he told me there was an inside turn to the two-stride, so I gave it my best shot,” Adams explained. “I landed after the oxer and looked left, and Starfighter stayed right there with me. After that, I just had to focus on the trot fence.”

The pair jumped the trot fence perfectly, to walk down to the high option oxer. “I took the tightest inside turn to the final fence and Starfighter ended up locking onto the low option rather than the high option, but it worked nicely because I was able to land right and finish on a nice turn.”

Adams and Starfighter received a score of 92 from the judges for an overall score of 182 for the win.

“Starfighter is the best hunter derby horse. This is the only class he ever shows in. He doesn’t need any prep, you take him out of the field, show up and win. Then he knows he gets to go get turned out when he gets back home. It’s the best life,” laughed Adams.

Seventeen horse-and-rider combinations competed for the lion’s share of the prize money in the $10,000 WEC Ocala 3’ Open Hunter Derby, but it was Erin McCabe Clayton and Two Jacks Farm LLC’s Milo that emerged victorious.

Clayton and the seven-year-old Holsteiner gelding by Urico found a lovely track in the first round to earn a score of 85.75.

Clayton spoke about the talented young gelding, “Milo is perfect. He is owned by Carly Herrin. She shows him in the 3’3” Amateurs and I get to play with him in the derbies sometimes,” said Clayton. “Just recently, we won a derby at the Venice Horse Show.”

Clayton returned for the handy with a plan, “I made a mistake in the first round and had some points to make up, so I knew I was going to have to take some risks,” said Clayton. “I decided to go inside after jump two and stay as tidy as I could everywhere else.”

The pair floated around the winding handy track for a high score of 90 from the judges, which totaled an overall score of 174.75.

Clayton enjoyed today’s tracks, “The course was beautiful. You were able to pick up a good rhythm and stay. The jumps were placed perfectly, and it allowed you to show off your horse well.”

The $10,000 WEC Ocala 3’ Jr/Am Hunter Derby saw a strong field of athletes compete for the blue ribbon over Dean Rheinheimer’s opening track, but it was Madison Moore and her own King VD Wellington that dominated the class securing an overall score that was 11 points higher than second place.

Moore and the 12-year-old Belgian Warmblood gelding produced a textbook first round for a score of 87.

Moore and King VD Wellington were the final pair to attempt the handy, “I knew I was on top, so I wanted to stay consistent. I rode the first fence direct, so I could get the nine in the first line. Then, I opted to do an inside turn, but my main focus was to have fun and be consistent.”

The pair cantered around the handy track, opting to jump all three high options to earn a high score of 89 for a two-round total of 176.

“This was my last show as a junior, so I couldn’t be happier with the result. I had no expectations going into the class today, I just wanted to have a good round, and if I was able to make it in the top 12, I would have been happy,” laughed Moore. “I am so happy to end my junior career on such a high note and this happened to be my first derby win ever. I am so proud of King.”