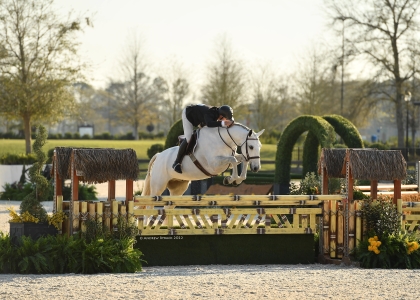 Timothy Maddrix and Sarah Campbell’s Shutterbug (Catango Z x Seuerka) bested a field of 30 competitors to earn the win in the $20,000 WEC Ocala 3’6”-3’9” Hunter Derby. Maddrix and the stylish 14-year-old Czech Warmblood gelding laid down a lovely first round, jumping all four high options in perfect form for a score of 89.5.

“The first course was long. It was a bit of a fitness test, which was great. A lot of single jumps, a little good mix up with the skinny down at the end of the ring and the rolling bending lines. A lot of the course was off the eye, which I really enjoyed. It suited me and Shutterbug very well,” said Maddrix.

Maddrix and Shutterbug returned to try their hand at the handy round, “We came back fourth. I knew we were close and there was only two points separating me from the leader, but you never know if you’re going to make it up or not. I was able to be super handy from the high option oxer back to the skinny. Shutterbug was right there ready for me to tell him where to go. I think that’s what made us stand out in the handy round.”

Maddrix and Shutterbug delivered an impeccable handy round to earn a high score of 91 for a two-round total of 180.5 for the win.

“I love this horse. I lost him for three years and go him back just to be a derby horse. This is his first win back with me. He was the first horse that I picked out when I first started my business. We had him for four years and he was owned by one of my favorite people. She ended up moving to Texas and brought him with her. After three years she sold him to Sarah Campbell, who called me asking if I would do the derbies on him again and I was thrilled. I am so happy to be able to ride this incredible horse again,” expressed Maddrix.

Thirty-three stunning hunters gathered at the WEC Stadium this morning to compete for the blue ribbon in the $15,000 WEC Ocala 3’ Open Hunter Derby, ultimately it was Dorothy Douglas and MTM Farm’s MTM La Vita that earned a pair of scores in the 90s to secure the top prize.

Douglas and MTM La Vita entered the WEC Stadium toward the end of the order, producing a foot-by-foot perfect first round, jumping all four high options in perfect form to earn the class’s highest handy score of 93.

“MTM La Vita is incredible. She won all of the Pre Green classes this week. She is ready for a kid that wants an amazing small junior hunter,” said Douglas.

Douglas and the Holsteiner mare were the last pair to return for the handy round, “MTM La Vita has the best jumping style. In the handy there were I could have been a bit smoother but she still jumped perfectly. It is cool as a rider to know that you don’t have to be perfectly accurate in order to get a great jump,” expressed Doulgas.

Douglas and MTM La Vita put forth a gorgeous round, seamlessly rolling around the turns to earn a score of 90 from the judges for an overall score of 183.

“We love competing in this arena. The courses are always stunning, and the jumps are incredible. We couldn’t be at a better venue,” stated Douglas.

Harbour and the 14-year-old Dutch Warmblood gelding created an impeccable first round, opting to take all four high options to earn the class’s highest first round score of 91.

“I love riding in this ring. The first round rode very nice. There was only one line where you had to do the nine and there were some related lines, but you could choose whether you wanted to stay out or be direct,” said Harbour.

Harbour and Fitz came back to the WEC Stadium for the handy, “There wasn’t any crazy options for this handy. I just tried to stay smooth and let the jumps come to me.” Harbour and Fitz delivered an effortless round to earn a score of 89 for an overall score of 180.

“This is one of our favorite places to show. We love coming here and we will be back in the summer. Everyone is so nice, and the show runs so well. I would like to say Happy National Employee Appreciation Day to all of the WEC Employees because this place would not be able to do what it does without you. Thank you to the Roberts for building such a world class venue for us riders and our horses,” smiled Harbour.

Before the start of the handy round in the $15,000 WEC Ocala 3’6″-3’9″ Hunter Derby, Bill Rube presented the prestigious Style of Riding Award to Megan Young for her classic style and her sportsmanship. The recipient serves as a role model for preserving the integrity and tradition of equestrian sport. “This award is very special to me because the recipient of this award pays it forward both in and out of the show ring,” says Rube. Young received an elegant duffel bag and wore a yellow rose corsage on her lapel throughout the handy round to signify her achievement.