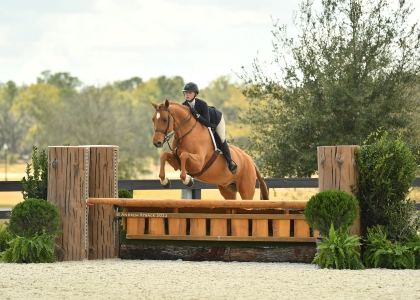 Week V’s World Equestrian Center – Ocala’s Sunday Spotlight shines on junior rider, Reilly Gogul of Wilmington, Ohio. Gogul’s love for riding started at an early age. Both of Gogul’s parents have been in the industry for a very long time, her father Jeff Gogul is a renowned professional while her mother is an amateur. At just 16-years-old, Gogul has enjoyed a successful junior career and hopes to continue that success during next week’s World Equestrian Center – Ocala Premier Equitation Cup Championship. We met up with Gogul to talk about her experience from last year’s Premier Cup and what she is looking forward to this year.

WEC: Tell us about your experience from last year’s Premier Equitation Cup Championship.

It was so much fun! It’s not very common for an equitation class to be under the lights in a big outdoor arena, especially not as grand as this one. Some Maclay and Medal finals run at night, but they are always indoors, so you never get that feeling that you’re riding in a night class.

I thought I was going to be really nervous and feel a lot of pressure, but I ended up having a great time. Obviously, there was a car up for grabs, so there was a little pressure, but everyone seemed relaxed and just excited to be there.

I also loved the course. I really liked the triple bar and stone wall fences. The courses asked a bunch of fun questions, which made it super exciting.

Last year, I rode Now We’re Talkin’ a 10-year-old Holsteiner gelding. He was great! We made it to the flat phase, but not the test. I was still super thankful to have had the experience.

This year, I will be showing What’s Poppin’. He’s a 12-year-old Holsteiner who was actually my jumper until May of 2021. I found myself without an equitation horse, so we started to do him in some equitation classes, and he was pretty good.

I was doing the Low Juniors with him mostly and we did do the Mediums a few times, but found that he preferred the Lows. But, he has more than enough scope for the 3’6”. With his previous owners, he did the High Juniors and 1.40m classes.

WEC: How do you plan to prep for the Premier Equitation Cup Championship?

Our main focus is keeping him quiet. The jumps should back him off and keep him interested, so we haven’t been doing too much with jumps. I rode him in the WEC Grand Arena earlier this week to get him familiar and he was great.

WEC: Are you excited about potentially winning a car?

I don’t have my official drivers license yet. I still have my temporary because Ohio changed that law, now making you have to have your temporary license for a year. Hopefully I’ll get my license in April, but it would be amazing to have a car waiting for me. I was going to steal my dad’s car, but I might not have to!

WEC: Do you have any other horses with you this week?

I have my Children’s jumper here, and she is hopefully getting leased, which will be really fun to watch her go in the ring. I also recently imported a new jumper that is currently in quarantine. So, I am very excited to finally get her here. She will probably be here next week. Our plan is to do the Modified and Lows with her and then hopefully move up once I get to know her. She’s a super cute 10-year-old grey mare. I tend to get along with mares the best.

So, next week is going to be pretty exciting with the Premier Cup and my new mare coming!

Thank you, Reilly, for catching up with us! We wish you the best of luck next week in the Premier Equitation Cup Championship!