The evening began with the Junior/Amateur World Equestrian Center Premier Cup Classic. Entries could choose which jump height they preferred to compete at – 3’3″ or 3’6″. Nineteen entries contested the course, but it was Amateur Kimberly Maloomian and her own Finch Hatton (Furst Wettin x Miami) that took home the champion ribbon, a beautiful Equitex cooler and a brand new 2019 Chevrolet Blazer.

Eleese Shillingford and her own Odyssey (Chin Win x Loreen) set the standard for the class with a high first round score about midway through the order. Given that the pair often competes in the 3’6″ Junior Hunters, Shillingford and the seven year old Westphalian gelding competed at 3’6″ in tonight’s class. The pair navigated a stunning first round for a score of 87.

Shortly after, Jordan Toering and Rick Toering’s Premonition BHF (Pablo x SPS Galaxis) took to the course. The pair also competed at the 3’6″ height and were well-schooled after a second place finish in yesterday’s Non Pro $20,000 USHJA National Hunter Derby. Toering and the thirteen year old Hanoverian mare also delivered a fantastic first round for a score of 86.

Kimberly Maloomian and her own Finch Hatton (Furst Wettin x Miami) scored the highest first round score of the class near the bottom of the order. Like many others, the pair also chose to compete at the 3’6″ height, as they normally showing in the Amateur Owner Hunters. This evening, Maloomian and the nine year old Deutsches Sportpferd gelding laid down a foot-perfect first round for a score of 90.

The course was reset and the top twelve contenders returned for the second round of the Junior/Amateur World Equestrian Center Premier Cup Classic. The 3’6″ entries were first to return and Maloomian rode Finch Hatton near the top of the order. The pair navigated a second flawless round, earning a score of 80 for a two round total of 170, moving themselves to the top of the scoreboard. Shillingford and Odyssey were next to return, scoring a 79 and bringing their two round total to 166. Toering and Premonition BHF were last of the 3’6″ entries to return, scoring an 83 and bringing their two round total to 169. By the end of the class, Maloomian and Finch Hatton were still comfortably atop the scoreboard and the pair took home two giant ribbons, a lovely Equitex cooler, their name on the stunning perpetual trophy and a brand new 2019 Chevrolet Blazer.

Maloomian also had a ride that took fourth place in the Child/Adult World Equestrian Center Premier Cup Classic, so we caught up with her after the awards presentation of the Child/Adult Classic. Maloomian first commented on her win in the Junior/Amateur World Equestrian Center Premier Cup Classic, “I did Finch Hatton in the Junior/Amateur class and he’s my younger horse, so I didn’t really know what to expect. He’s been a little anxious and nervous sometimes in situations like this, so I wanted to make sure I got to the far end of the ring to get to jump number one. He really rose to the occasion.”

She also commented on the course, “The course was beautiful. I thought it rode perfectly and it was a good experience for the horses.”

When asked how she felt about winning a car, Maloomian laughed, “I’m not sure that winning a car has sunk in yet. I’m going to have to figure out how to get it home because I drove the horses here myself! I’ll figure that part out. It’s very cool to have a prize like that offered to Juniors and Amateurs. That really makes you have a goal for something that you want to do.”

Maloomian commented on Finch Hatton’s personality, “He’s probably the only horse in the barn that’s really happy to see me each day. He’s very much like a mommy’s boy and wants to be in your pocket. I think some of that is his anxiety and he wants to be with you, but he’s happy when he knows that he’s done a good job and he feels excited for himself.”

When asked about her ride in the Child/Adult World Equestrian Center Premier Cup Classic, Maloomian responded, “Light It Up is a good horse. He’s a little more of a challenging ride for me, so I go back and forth between showing him in Amateur Owners and Adults because sometimes I feel confident and sometimes I don’t. He was a little frisky in the first round, but I was really pleased with the 88 in the handy.”

She also commented on Light It Up’s personality, “He is a cuddler. He’s actually my husband’s horse, so he can do naughty things for all of us but my husband walks in the barn and he is like ‘Oh, Dad!’ and puts his head on his shoulder.”

Maloomian also added, “I take both of them all over the country by myself in the trailer. People think I’m crazy because I’ll lead them both to the wash stall at the same time. The horses have to get along if they’re going to be my horses, because I do it all myself. My trainer Jimmy Toon actually did come this week, so it was nice to have some help. My friend Ann Perry had never been here before, so she came and helped with everything, too. We’ve been having a great week. I love coming to this show. I try not to miss it, it’s worth the fourteen hour drive!”

The Child/Adult World Equestrian Center Premier Cup Classic had a total of nineteen entries who had qualified for the class earlier in the Fall shows at WEC. Jump heights were set at 3′ and entries were also vying for the opportunity to win a brand new Chevrolet Blazer. Scores were tight, but it was nineteen year old Amateur Hannah Eddlemon and Snowbird (Vingino x Vegannie) that took home two over sized ribbons and a brand new 2019 Chevrolet Blazer.

The high scorers of the first round rode about midway through the order starting with Hannah Toohey and her own Adlib (Lepit). The pair often show to top placings in the Adult Amateur Hunters, preparing them for tonight’s class. Toohey and the thirteen year old Dutch Warmblood gelding were impressive in the first round, earning a score of 85.

Another of the top scores in the first round was earned by Izzy Beisel and Sarah Rantanen’s Favoriet. The pair have been taking top placings in 3′ Children’s Hunter and Equitation classes throughout October at World Equestrian Center. Tonight, Beisel and the nine year old Warmblood gelding wowed the judges for a first round score of 88.

Also scoring into the eighties in the first round was Hannah Eddlemon and Snowbird (Vingino x Vegannie). The pair have been racking up miles in the Adult Amateur Hunters, schooling them for this evening’s class. Tonight, Eddlemon and the handsome eleven year old Dutch Warmblood gelding laid down a fantastic first round for a score of 86.

The course was reset and the top twelve entries returned for the second round of the Child/Adult World Equestrian Center Premier Cup Classic. Toohey and Adlib returned near the bottom of the order, earning a second 85 score for a two round total of 170. Shortly after, Eddlemon and Snowbird returned and laid down a lovely round for a score of 86. This brought their total to 172, moving them to the top of the scoreboard. Last to return was 11-year old Izzy Beisel and Favoriet whose brilliant, forward round earned them a score of 82.5 for a two round total of 170.5, earning them a second place finish behind Eddlemon and Snowbird. 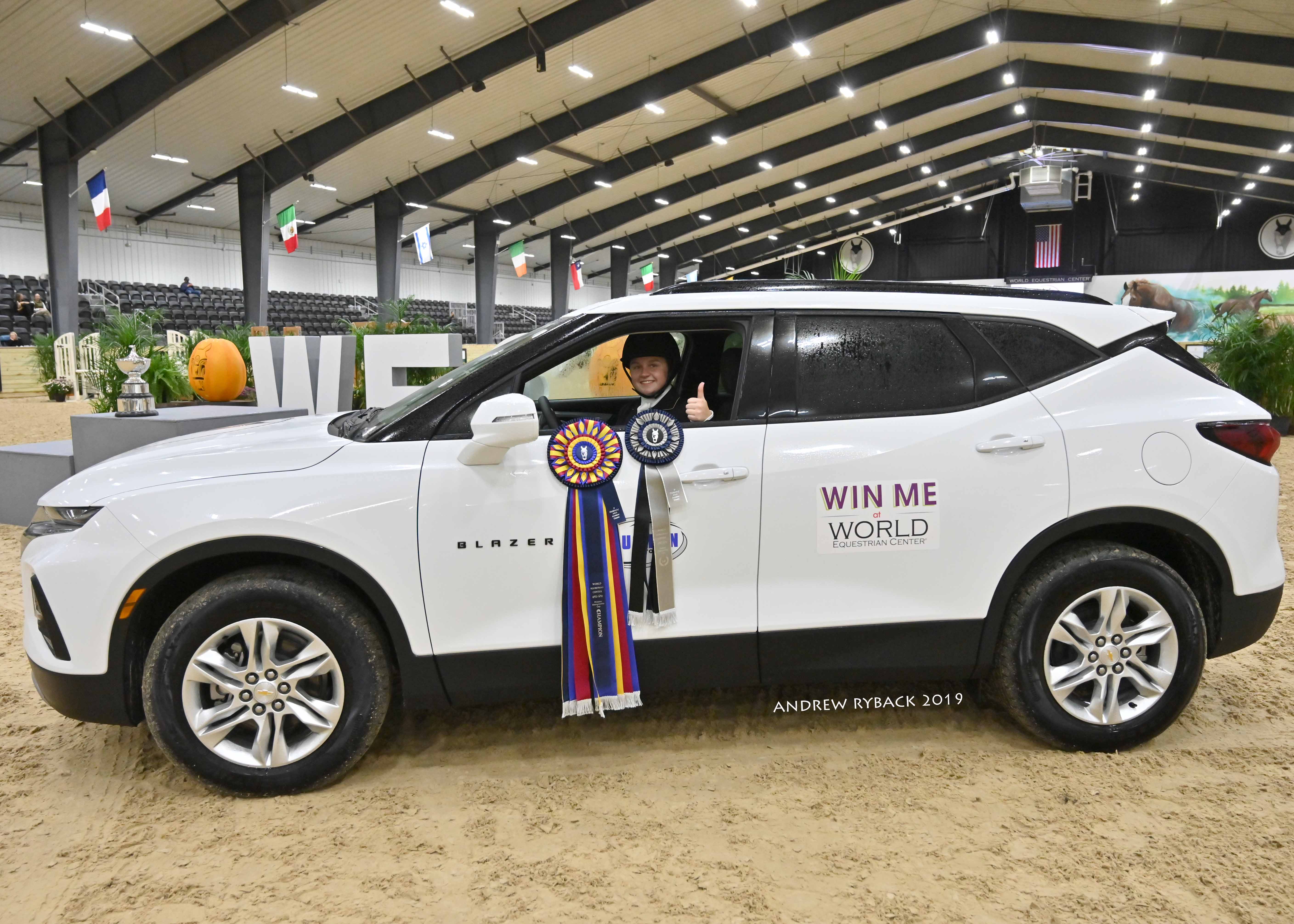 We caught up with Eddlemon, a sophomore at Wright State University, after the awards presentation to hear about her win, “I was kind of nervous because I did not have a good week last week. I went in with the attitude of, ‘If we don’t win the car, that’s okay.’ I just wanted to have fun. He got a little nervous in the schooling ring, which made me a little nervous, so I had to calm him down a little. He settled down after the first jump and was awesome to the rest of them.”

When asked about Snowbird’s personality, Eddlemon joked, “He is an underachiever. He is very lazy and he was probably not happy that he had to show at this time of night, but he pulled it together and did a good job.”