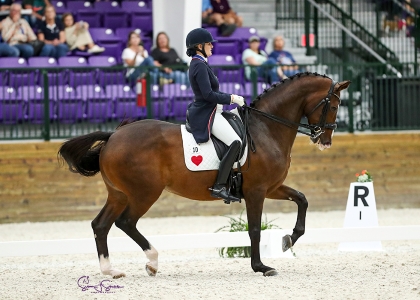 Friday evening, Holzer and Havanna 145, a 14-year-old Hanoverian mare by Hochadel x Rodgau, had the leading score of 71.132% to win the Grand Prix to Freestyle CDI-W class. Codi Harrison (USA) and her own Katholt’s Boossco were second with 70.974%. Naima Moreira Laliberte (CAN) and KML Inc.’s Statesman were third with a score of 69.289%

Earlier on Friday in the Grand Prix to Special, Howington and Cavalia, a 14-year-old KWPN mare by Sir Donnerhall x I.P.S. Gribaldi, won with a score of 70.609%. Second place went to Susan Dutta (USA) and Don Design DC with 70.022%, while Kerrigan Gluch (USA) and Hampton Green Farm’s Mejorano HGF were third with 67.283%.

Pablo Gomez Molina and Servus Ymas, an eight-year-old Hanoverian gelding by San Amour I, were victorious in Friday afternoon’s Prix St. Georges CDI3* with 70.000%. Second place went to Hansel, ridden by Ashley Holzer for P.J. Rizvi. They scored 68.382%. Rebecca Wait and Beirholms Eclaire, owned by Mary Zorzit-Mattingly, were third with 66.422%.

Holzer and Havanna 145 captured their second win on Saturday, October 23, 2021 in the Grand Prix Freestyle CDI-W. Holzer and Havanna 145 stepped into the ring to perform their freestyle for the first time in more than two years, having practiced it once at home to music. Holzer was pleased with the outcome.

“I had a great time,” she said. “I was honestly a little nervous. She’s hotter in this venue than she is normally at home. I was a little worried about the timing exactly, getting her quietly from movement to movement with inner tension going on and getting her relaxed, but it worked out.” Holzer and Havanna 145 finished their test with a 76.480% for the win.

The Grand Prix Special CDI3* was captured by Jessica Howington and her own Cavalia, who recently moved to Ocala in May. The pair won the Grand Prix to Special on Friday and Howington felt that her test in the Special was an improvement. They finished the Special with a score of 71.574%.

“My goal was to have a little more energy, and I think we managed that three-fourths of the way through,” said Howington. “I was happy with that; it was improvement in my mind. She was a little more with me tonight. Overall, she was just ready to go. I was definitely happier with my ride tonight.”

Earlier on Saturday, Holzer took home a third win, but this time aboard P.J. Rizvi’s Hansel, having reached a score of 70.490%. Pablo Gomez Molina (ESP) and Servus Ymas, owned by Cristina Danguillecourt, were second with 69.167%, while Rebecca Waite (USA) and Beirholms Eclaire, owned by Mary Zorzit-Mattingly, were third with 67.402%.

In the final day of the World Equestrian Center Dressage IV show on Sunday, October 24, 2021, Pablo Gomez Molina (ESP) and Servus Ymas, owned by Cristina Danguillecourt, scored their second win of the week, this time in the Intermediate 1 Freestyle CDI3*. Competition for this CDI-W event wrapped up, but dressage returns to World Equestrian Center – Ocala on December 9-12, 2021.

World Equestrian Center – Ocala would like to highlight a rider that from the Dressage IV CDI-W show, named Katie Jackson. Jackson is a para-equestrian who lost a leg due to cancer in 2015, but that doesn’t stop Jackson and her own Scrabble from defying the odds.

Jackson and Scrabble competed in the national USEF, FEI Prix St. Georges test, which is a very difficult test that includes pirouettes, half passes, tempi changes and more.

Jackson and her horse Scrabble are really coming together as a pair, “I have owned Scrabble for about a year now. He is a 15-year-old Hanoverian. It’s still a pretty new partnership but we have come a lot way. I connected with Scrabble through my coach Chrissa Hoffmann, he was her Grand Prix horse. She has had him since he was five and trained him up through the Grand Prix.”

Jackson very happy with her Prix St. Georges test on Sunday, “It is a challenging test. This was actually my fifth ever, Prix St. Georges. I had ridden it a few years ago on another horse but looking back I really just rode a pattern and now I am dissecting it to really highlight our abilities as a team.”

Jackson found para-dressage and has enjoyed success, being named as a USA team alternate for the World Equestrian Games (WEG) on a horse that she rode before Scrabble, named Diesel.

“After that experience and owning Scrabble for quite some time, I have learned so much in the past year. I am now able to tell what Scrabble enjoys and what we need to work on, like riding a left pirouette without an outside leg or to do zig zags, but it’s learning how to come together and use the aids that work for us both. I always dreamed about doing the tests that I am doing now, but never actually thought I would be here.”

Thank you to all competitors on an amazing weekend of equestrian sport! We hope to see everyone back for the Dressage V, CDI-W horse show held on December 9 – 12, 2021.