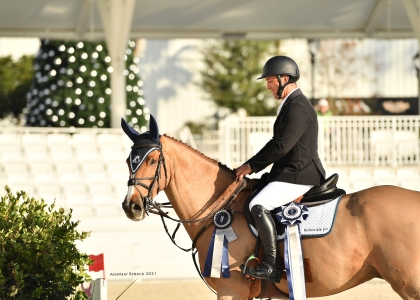 Tynan and Ballinteskin Joe delivered a lovely first round going toward the end of the order, stopping the clock at 81.179 seconds. Tynan and the 10-year-old Irish Sport Horse gelding advanced straight to the jump-off, flying through each line easily soaring to the top of the standards to stop the jump-off clock at 34.930 seconds for the win.

Thirty-one entries took to the WEC Grand Arena under the lights on Saturday night to contest the $75,000 Coca-Cola Beverages Florida Grand Prix. FEI Level III course designer, Catsy Cruz of Mexico designed the technical tracks that featured difficult combinations that caught many riders. Fifteen entries managed clean first rounds and ten jumped double clear, but it was Olympic Gold Medalist Will Simpson and his own Chacco P (Chacco Blue x Cera P) that galloped away with the top prize.

Simpson has had a stellar week, winning Thursday’s $15,000 WEC Ocala Welcome Prix aboard Whoop De Doo. The Olympian produced clean rounds on both Whoop De Doo and Chacco P in Saturday night’s $75,000 Coca-Cola Beverages Florida Grand Prix, but Chacco P delivered a time that no other could best.

Simpson and Chacco P navigated a fast and smooth first round, easily clearing each fence to stop the clock at 76.145 seconds, well under the time allowed of 82 seconds. Simpson was energized by the atmosphere at WEC, “Tonight felt like it was big time with the lights and the crowd. Chacco P walked in the ring, took a look at the lights and I could feel that he was ready to go. He knew he better put on his best performance.”

Simpson and the 12-year-old Mecklenburg gelding returned for the jump-off, “I walked ten strides in the first line and thought if I had to do nine, I could probably get it done. Then Tracy went in. After Tracy pulled out an eight in the first line, I knew we had to put the hammer down early. I added one to the combination, because Chacco P is 18 hands, so I couldn’t really run to the combination. Then in the last line I saw Tracy wait for the ten, so if I got the nine done, I knew I would have her time. I didn’t see it until stride seven and at that speed, I was thinking “come on baby show up” and it did thankfully.”

Simpson and Chacco P flew through the jump-off timers stopping the clock at an unbeatable 36.815 seconds.

Earlier on Saturday afternoon, 30 entries contested the $10,000 WEC Ocala Futures Prix 1.30m-1.35m but it was Derek Petersen and his own Zechariah 3:9 (Zirocco Blue x Katrina) that captured the fastest time. Petersen and Zechariah 3:9 have had a successful week, earning second place during Thursday’s $15,000 WEC Ocala Welcome Prix. Petersen and the seven-year-old Dutch warmblood gelding, produced a flawless first round toward the end of the order, easily soaring over each fence to stop the clock at 73.903 seconds, well within the time allowed of 79 seconds. Petersen and Zechariah 3:9 advanced straight to the jump-off, galloping through the entirety of the course while delivered tight turns to stop the clock at 37.108 seconds for the win.

This afternoon’s $12,500 WEC Ocala 3’6”-3’9” Hunter Derby saw a driven field of eleven horse-and-rider combinations compete for the blue ribbon with scores soaring into the high 80s, but none could best Clair Kellner and Suzanne Cayatte’s Caligua (Casall x La Corofina).

Kellner and the nine-year-old Holsteiner gelding delivered a stunning first round, only taking one high option to earn the class’s highest first round score of 89. Kellner and Caligua returned for the handy, flowing seamlessly throughout the course to earn a handy score of 84, for a two-round total of 173 for the win.

Twenty-six horse-and-rider combinations gathered at Hunter 1 on Friday to vie for the win in the $10,000 WEC Ocala 3’ Hunter Derby, but it was Megan Young and Lee. D Cesery’s Comanche that finished on top. Young and Comanche were the first entry to enter the ring, producing a foot-by-foot perfect first round to earn the class’s highest first round score of 90. Young and the 13-year-old warmblood gelding returned for the handy navigating a perfect handy round, while jumping all four high options to earn a high score of 93, for an overall score of 183 for the win.

Simpson and Whoop De Doo were the seventh pair to enter the class on Thursday, delivering a clean and smooth first round stopping the clock at 76.127 seconds. The pair advanced straight to the jump-off, establishing a forward gallop to fence one to take a tight inside turn in eight strides to fence two. Simpson and the 10-year-old Warmblood mare continued to the C. Jarvis Insurance one stride leaving all rails up. The duo took a tight turn back to the World Equestrian Center skinny where they landed right to swiftly roll back to the Lugano Diamonds oxer. Simpson and Whoop De Doo then galloped to the last line where they left out a stride to stop the clock at 36.498 seconds, a time that no other competitor could catch.

Congratulations to all on a successful week of equestrian sport!