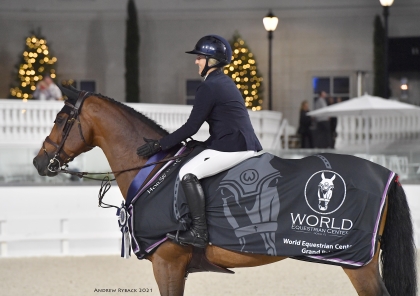 Tynan and Ballinteskin Joe were the first horse-and-rider pair to enter the class on Sunday morning delivering a perfect first round stopping the clock at 76.889 seconds. Tynan and the 10-year-old Irish Sport Horse gelding advanced straight to the jump-off rolling through the entirety of the course while taking quick inside turns to stop the clock at 32.207 seconds, a time that no other competitor could catch.

An international list of competitors from 10 different countries took to the WEC Grand Arena under the lights on Saturday to contest the $75,000 Ethel M. Chocolates® Grand Prix. FEI Level IV course designer Bernardo Costa Cabral of Portugal designed the technical tracks that featured a difficult triple and double combination that tested many riders throughout the night. Sixteen horse-and-rider combinations managed a clean first round and six jumped double clear, but it was Samantha Shaefer and Bonne Vie LLC’s Frasier (Carambole x Bloem) that took home the top prize.

Schaefer and Bonne Vie LLC’s Frasier entered the class toward the end of the order, delivering a perfect first round easily jumping to the top of each standard to stop the clock at 81.897 seconds.

Schaefer and Frasier have created an amazing partnership, “I have had Frasier for almost a year now. My first horse show with him was here at World Equestrian Center – Ocala during the Winter Series. He came to me through McLain Ward. I actually went there to try him as a sales prospect and fell in love with him right away. I ended up getting really lucky at the end of season last year when he didn’t sell. I have the most amazing group of owners that stepped up to the plate to buy him for me to ride.”

Schaefer and the incredible 11-year-old Dutch Warmblood gelding returned for the jump-off. “This was a great jump-off for Frasier. I thought the first eight suited him well. I could get there easy and slow him down. I was able to turn back to get the eight done to the next fence. My goal was to land and get there as fast as I could. Then I was able to curl right around to the combination. That was the one place that I thought we might have problems because he has a slight right drift. Then, I did seven strides back to the white vertical. He was right on cue with me for that one. I ended up a bit quiet to the pink, but he picked right back up and marched home.”

Schafer and Frasier landed and flew through the timers stopping the jump-off clock at 38.071 seconds for the win.

Early on Friday morning, 46 competitive horse-and-rider combinations took to the WEC Grand Arena to challenge the $10,000 WEC Ocala Futures Prix, but it was Willie Tynan and Michelle Guardino-Dettelbach’s Fancy Girl that took the top prize. Tynan and the 11-year-old Dutch Warmblood mare delivered a beautiful first round, leaving all rails up to stop the clock at 64.361 seconds. Tynan and Fancy Girl (Zirocco Blue x Australia) advanced straight to the jump-off, leaving out strides with ease while taking multiple inside turns to stop the jump-off clock at 33.361 seconds.

Later on Friday, 45 stunning hunters took to Hunter 1 to vie for the win in the $12,500 WEC Ocala 3’6”-3’9” Hunter Derby and $10,000 WEC Ocala 3’ Hunter Derby. Doug Russel designed the natural tracks that featured an abundance of inviting obstacles with three high options.

Thirteen gorgeous horse-and-rider combinations took to Hunter 1 on Friday to compete for the top prize in the $12,500 WEC Ocala 3’6”-3’9” Hunter Derby. Competition was fierce with scores soaring into the high 80s, but it was Dorothy Douglas and Abigail Davenport’s MTM Lolah LOL that took home the top prize.

Douglas and the eight-year-old Westphalian mare produced a lovely first round taking all three high options with ease to earn a first round score of 87. Douglas and MTM Lolah LOL returned for the handy, cantering right from the gate to fence one to take a nice inside turn back to the high option. The pair rolled seamlessly over the high option vertical in the center of the ring to easily bend to the large oxer. Douglas and MTM Lolah LOL jumped the combination with ease to take a tight inside turn back to the oxer. The pair came down to a trot and jumped the log. Douglas held a counter canter with MTM Lolah LOL to the last oxer where MTM Lolah LOL showed off her incredible scope. The pair earned a handy score of 88 for a two round total of 175 for the win.

Congratulations to all competitors on a successful Ocala Fall Show Series. We hope to see everyone soon for the 12-week 2022 Winter Spectacular Show Series starting on January 5, 2022!