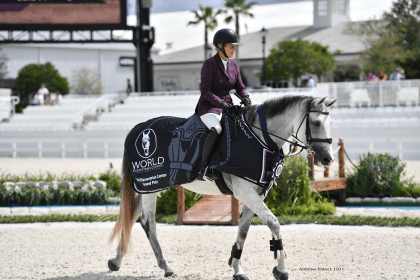 The final feature class of the World Equestrian Center – Ocala NSBA Summer Series hunter/jumper sanctioned horse show kicked off early Sunday morning as 27 entries vied for the win in the $15,000 WEC Ocala 1.40m Jumper Classic. Guilherme Jorge an FEI Level IV course designer created the technical track that featured two tricky double combinations that tested many riders throughout the class. Eleven entries managed a clean first round and nine jumped double clear, but it was Olympic rider, Santiago Lambre (MEX) and his own Doloris that took home the blue ribbon.

Lambre and the 13-year-old KWPN mare have had a successful series earning multiple top three finishes in featured classes. Lambre and Doloris (Harley VDL x Colinda D) produced a clean first round toward the end of the order stopping the clock at 73.961 seconds. Lambre and Doloris advanced straight to the jump-off, starting off on a nice angle to fence one to land left to set them up for a nice gallop to two. The pair soared to the double combination to whip back around to fly through the remainder of the course, stopping the clock at 29.891 seconds for the win.

Fenney and MTM Apple (Favorit Ask x Kong’s Whopsie) delivered a clean first round toward the end of the class, stopping the clock at 79.530 seconds, just under the time allowed of 81 seconds. “I thought the course was hard, but it is an entirely different class when it’s not under the lights. During the day the horses aren’t as spooky, and the environment is a lot calmer. So even though it was a hard course, having the class in the morning really helped a lot of riders. Many did go clear, but this is such a great facility, all the horses should jump well because we have everything going for us here.”

Fenney and MTM Apple were the second to last pair to return to the jump-off, “I knew how fast my time was on [MTM Dolce Vita] but then Sharn [Wordley] went in and beat that time. I knew I was going to have to be tad bit faster but then Will [Simpson] and Santiago [Lambre] went in, and really beat Sharn’s time. So I knew I had to just give it my all because I had nothing to lose.”

Fenney and the ten-year-old Danish Warmblood mare started the jump-off on a strong gallop to fence one to roll to fence two in nine strides. Fenney and MTM Apple whipped around to fence three to fly on a flat gallop to the Coca-Cola Beverages oxer. The pair landed and swiftly rolled back to the Kentucky Performance Products vertical to soar to the double combination in nine strides. The pair jumped out of the double combination to fly home, stopping the clock at 38.911 seconds to earn Week X’s $75,000 Coca-Cola Beverages Florida Grand Prix win.

Fenney was incredibly proud of the scopey mare, “MTM Apple is amazing. She is such a good girl and is in it to win it with me every time. We have had such an amazing summer here and we can’t wait to come back for the winter.”

Maddrix and the 12-year-old Dutch Warmblood gelding delivered a smooth and fast, clean first round in 72.198 seconds, well under the time allowed of 79 seconds. Maddrix and Skyfall (Vigaro x Twi Light) advanced straight to the jump-off, starting off on a nice gallop from one to two in eight strides. The pair galloped to the tall green vertical to fly to the double combination. Then the pair made a super quick turn back to the next jump to gallop to the final oxer, to stop the clock at 34.852 seconds.

Friday marked the final Hunter Derby Friday of the World Equestrian Center – Ocala NSBA Summer Series with more than 40 beautiful hunters vying for the win in the $12,500 WEC Ocala 3’6”-3’9” Hunter Derby and the $10,000 WEC Ocala 3’ Hunter Derby. Pat Muskus designed the winding tracks that featured stunning natural obstacles and forward lines that allowed riders to show off their horse’s brilliance and adjustability.

Friday afternoon’s $12,500 WEC Ocala 3’6”-3’9” Hunter Derby saw 16 competitive horse-and-rider combinations ride for the win with scores soaring high into the 80s. Hanna Toering and Lori Christman’s In The Black captured the win on Friday, navigating two beautiful rounds. Toering and the 11-year-old Westphalian gelding performed a lovely first round, jumping all three high options to earn a score of 76. The pair returned for the handy, establishing a nice pace early on to get a nice distance to the first oxer. The pair jumped the high option of fence two to wrap round to the trot fence. The pair flowed seamlessly through the rest of the course to earn a handy score of 83 for a two-round total of 159 for the win.

Earlier on Friday afternoon, 26 stunning hunters took to the CaptiveOne Advisors Indoor Arena to compete for the top prize in the $10,000 WEC Ocala 3’ Hunter Derby, but it was Erin McCabe Clayton and her new mount Milo that brought home the blue ribbon. Clayton and Milo navigated a flawless first round, jumping all three high options to earn a first round score of 85. Clayton and Milo returned for the handy, producing an impeccable handy course taking a few inside turns toward the end of the track to earn a score of 83, for a two-round total of 168.

Petersen and Derek Petersen’s Diamant’s Legacy has had great success during the NSBA Ocala Summer Series, earning second place in Week VIII’s grand prix and third place in last week’s grand prix. Petersen and Diamant’s Legacy entered the class toward the end of the order, producing a perfect first round, soaring to the top of the standards to stop the clock at 74.942 seconds. Petersen and the 12-year-old Oldenburg stallion advanced straight to the jump-off, leaving out a stride from fence one to two. Then the pair left out another stride from two to three. Petersen and Diamant’s quickly rolled back to the vertical to leave another stride out to the oxer. Then the quick pair did one less stride to the double combination to gallop to the finish in nine strides to stop the clock at 33.349 seconds.

Congratulations to all the competitors that competed during the 2021 Ocala NSBA Summer Series!