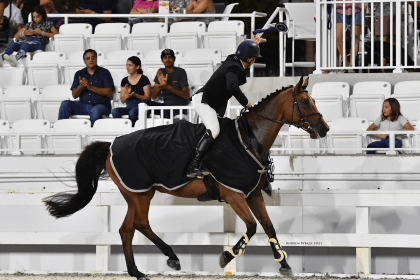 Douglas has had great success on MTM Pablo (Perigueux x Celina) during the World Equestrian Center – Ocala NSBA Summer Series, earning a win during Week VIII’s $10,000 WEC Ocala Futures Prix and now two wins in the $15,000 WEC Ocala 1.40m Jumper Classic. Douglas and the eight-year-old Warmblood gelding were the fourth entry to deliver a clean first round, stopping the clock at 82.801 seconds. Douglas and MTM Pablo advanced straight to the jump-off, jumping fence one to two in eight strides. The pair took a tight inside turn to the Triple Crown vertical, to fly through the rest of the course stopping the clock at 37.797 seconds for the win.

An international list of competitors from 11 different countries took to the WEC Grand Arena Saturday night to contest the $75,000 Agricon Kubota Superstore Grand Prix. Doug Russell designed the winding track that featured a difficult triple combination that tested many riders throughout the night. Sixteen horse-and-rider combinations managed a clean first round and ten jumped double clear, but it was Aaron Vale and Thinks Like A Horse’s Prescott that snatched the win.

Aaron Vale has had great success at World Equestrian Center – Ocala, now winning eight grands prix. Vale had an unfortunate rail down on his two other mounts Major and Elusive early in the class but returned with Prescott to deliver a smooth clean round, stopping the clock at 79.201 seconds.

Vale had to change his plan for the jump-off, “It was helpful to go later in the order because I got to watch a few jump-off. I walked the jump-off and had a plan for striding, but no one was doing the strides that I thought I could do, so I had to rethink my plan.”

Vale and Prescott by Lordanos returned to the jump-off, trying to best Tracy Fenney and MTM Dolce Vita’s time. “I was good from one to two, back to three. I originally thought that I could get ten strides to the Golden Ocala oxer, but everyone was doing eleven. I also thought I could get eight to the green vertical, but everyone did nine except [MTM Apple] and Tracy. I was 13 or 14 strides to the Lugano [Diamonds] oxer, then rolled to the double. I wanted to turn tighter to the double combination, but my horse is a bit greener, so I stayed out which set me up for the seven home, which is where I had the class.”

Vale and the nine-year-old Holsteiner gelding soared through the final timers to stop the jump-off clock at 42.175 seconds for the win.

Foley (IRL) and the eight-year-old Dutch Warmblood gelding delivered a fast and smooth clean round toward the end of the order, stopping the clock at 78.299 seconds. Foley and the speedy Idalgo started off on a strong gallop to fence one for a quick left turn back to fence two. The pair soared through the bending line not hitting the brakes once to gallop to the double combination. Foley and Idalgo flew around the turn to the large oxer to soar to the Triple Crown oxer. The pair raced down the last line to stop the clock at 42.821 seconds.

Another Derby Friday took over the CaptiveOne Advisors Indoor Arena as thirty-one stunning hunters vied for the win in the $12,500 WEC Ocala 3’6”-3’9” Hunter Derby and the $10,000 WEC Ocala 3’ Hunter Derby. Tucker Williams designed the winding track that featured an abundance of natural obstacles with four inviting high options. Competition was fierce in both derbies with scores soaring into the high 80s and low 90s.

Jennifer Bliss and Harris Hill Farm, LLC’s Poker Face (Tangelo Van De Zuutheve x Nicolette V) performed a beautiful first round, taking all four high options to earn the class’s highest first round score of 93. Bliss and the 16-year-old Dutch Warmblood gelding returned for the handy course delivering a smooth round, taking a few inside turns while jumping all three high options to earn a score of 85, for an overall score of 178.

Earlier on Friday afternoon, thirty entries took to the CaptiveOne Advisors Indoor Arena to contest the $10,000 WEC Ocala 3’ Hunter Derby but it was Dorothy Douglas and MTM Farm’s MTM Milagros that secured the highest overall score, 11 points higher than the second-place score.

Petersen and Diamant’s Legacy were the second to last pair to enter the class delivering a solid first round. Petersen and the 12-year-old Oldenburg stallion delivered a flawless first round, jumping each fence with ease to stop the first-round clock at 67.918 seconds, well under the time allowed of 74 seconds. Petersen and Diamant’s Legacy advanced straight to the jump-off, soaring through the course and leaving out strides to stop the clock at 33.143 seconds, more than two seconds faster than second place finishers Santiago Lambre and The Diamant Rose Z.

Congratulations to all on another successful week of equestrian sport!