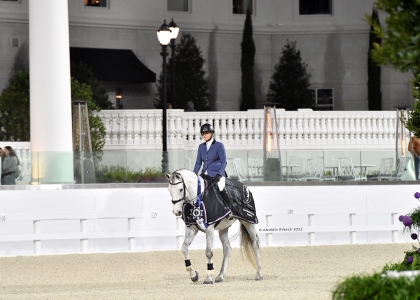 Fenney and MTM Apple are a fan favorite at World Equestrian Center – Ocala, earning a multitude of feature class wins and Grand Prix wins. Fenney and MTM Apple continued their hot streak on Saturday, delivering a fault-free first round in 82.141 seconds.

MTM Apple has been in Fenney’s stable for several years, “We purchased Apple when she was seven. She was so good and so easy that we sent her home right away. She started doing the Grands Prix when she was an eight-year-old and just kept getting better and better, year-after-year.”

Fenney and MTM Apple were the fourth to last pair to return for the jump-off. “I watched Rowan Willis go on [Wellington Grey Goose] and he was incredibly fast. I knew if he left all the jumps up, he would be impossible to beat. Luckily for me, he had the last one down. I also knew Aaron [Vale] was right behind me and he’s won so many Grands Prix, I knew I was going to have to go pretty darn fast. So, I did what I had to do, and Apple kicked into high gear.”

Fenney and the 11-year-old Danish Warmblood mare flew through the entire course, taking every inside turn available, stopping the clock at 48.021 seconds to secure the top spot.

Week III of the 2022 Winter Spectacular Show Series showcased the $10,000 Buckeye Nutrition Futures Prix under the lights on Friday in the WEC Grand Arena. The Futures Prix features riders or horses who are moving up to the higher levels of competition, and to help gain experience the class was held in a different atmosphere. FEI Level III course designer, Anderson Lima designed the inviting tracks that featured three double combinations. Eleven entries managed clean first rounds, and six jumped double clear but it was Kristen Vanderveen and her own Bull Run’s Agape (Lavall I x Kenza B) that took top honors.

Vanderveen and the now 10-year-old Holsteiner gelding produced a faultless first round, stopping the clock at 76.686 seconds, well within the time allowed of 79 seconds. Vanderveen and the speedy Bull Run’s Agape advanced straight to the jump-off galloping through the entirety of the course, not pumping the brakes once to stop the jump-off clock at 39.974 seconds, more than three seconds faster than the second place finishers.

Amanda Steege and Lafitte De Muze (Darco x Everlychin De La Pomme) earned their second World Equestrian Center – Ocala 3’6”-3’9” Hunter Derby win of the winter circuit. Steege and the elegant 10-year-old Belgian Warmblood gelding navigated a foot-perfect first round to earn the class’s highest first round score of 99. Steege and Lafitte were the last pair to return for the handy. The pair delivered a beautiful, rhythmic round that featured tidy turns and all the high options to secure a score of 92 for an overall score of 191.

Megan Young and Lee D. Cesery’s Comanche took home the top honors in the $15,000 WEC Ocala 3’ Open Hunter Derby early on Friday morning. The pair produced a lovely first round, opting for all four high options to earn the class’s highest first round score of 91. Young and the 14-year-old Warmblood gelding were the last pair to return for the handy, producing a foot-perfect first round, while taking a very tricky inside turn that only a few competitors attempted to secure a score of 89.5, for a two-round total of 180.5 for the win.

The $15,000 WEC Ocala Jr/Am Hunter Derby saw a competitive field of 37 entries hunt for the win over tracks built by Joe Carnicom (USA). Scores soaring into the 90s, but it was Isabel Harbor and IMH Equine, LLC’s Fitz (Numero Uno x Kootje) that produced two flawless rounds that caught the judges eye. Harbour and the 14-year-old Dutch Warmblood navigated a lovely first round, jumping each fence with ease opting to take all four high options to earn a score of 86. Harbour and Fitz delivered an impeccable handy round, while jumping each high option to secure the class’s highest handy score of 90 for a two round total of 176.

Wordley and Gatsby delivered a fast, faultless round securing the class’s highest first-round time of 70.435 seconds, well within the time allowed of 76 seconds. Wordley and the 18-year-old Irish Sport Horse stallion advanced straight to the jump-off, galloping from fence one to two in nine strides to bend to the C. Jarvis Insurance double combination in seven strides. Wordley and Gatsby landed left and flew to the five stride line to roll right back to the MARS Equestrian vertical. The pair soared home, flying over the last oxer to stop the jump-off clock at 36.523 seconds to earn first.

The week also included two additional hunter derbies including the $2,500 Pony Hunter Derby and the $2,500 Non Pro 2’6” Hunter Derby that showcased the same winners as Week II. Katalena Prusso and Falcon Ridge Stable’s Worth The Wait snagged another win, besting six other competitors.

Congratulations to all entries on another great week of equestrian sport! Good luck to everyone showing during Week IV!