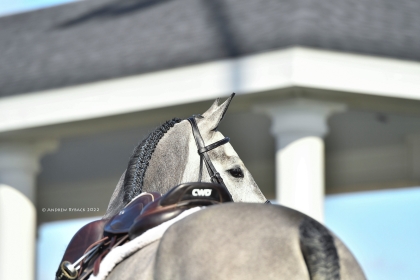 “The course was pretty technical. The triple combination asked a few questions. You either had to jump that a bit forward or sit up and get the nine done. Zechariah is so adjustable, that sometimes I end up doing a double add because he listens so well. But, the easiest place to ride him is in the show ring. I can’t ride one side of him at home,” Petersen joked.

Peter Petschenig (AUT) and his own Wannabe CS bested a field of 44 horse-and-rider combinations in the $75,000 Coca-Cola Beverages Florida Grand Prix.

“I haven’t ridden Wannabe CS in a lot of jump-offs. He won a grand prix a few weeks back and that was the first time I rode him fast, but he is actually game. Today, I wasn’t sure if I could keep him quiet because he can get really aggressive, but he handled it really well.”

“The course was very challenging, not many people went clear with really nice horses. But, Enrico Blue has been winning a bunch of classes in the last three weeks, so I was very pleased with him today. This is probably the biggest course that he has jumped so far, and he was super.”

“When I first rode her, she was a rocket. At that time, I was the time-fault queen. When I started to ride her, I fell in love with going fast and the spirit that she brought to the ring. I started to compete her in the 1.40m, then we thought maybe she can do the 1.45m and now we are jumping the 1.50m.”

“Comissario is very handy. I just look and he does the inside turns,” said Ward. “I would usually have went around the WEC letters, but I went inside because it set me up for the inside turn to the high option vertical. He did it perfectly and it was so easy for him.”

Amanda Steege and Ashley Wallace’s Best Of Me were the best in the field beating 43 other competitive entries in the $15,000 WEC Ocala 3’ Open Hunter Derby.

“I am a professional and I’m supposed to know what I am doing, but as I am sitting here at the gate, I’m thinking, huh, I’ve only ever jumped this mare once before and here we go, bending nine away from the gate to the high option, I think we will be fine. In the end, she was amazing and super fun.”

“Fitz is the best. He has no prep. He goes out in the pasture at night, and I ride him for 20 minutes the day before, then he’s ready to go.”

“His stride is my one criticism about him. It’s so big, I can’t go fast through the lines, but this course was pretty open. Today was the first day I was a little more aggressive with him and tried to win. He actually ended up jumping even better going faster.”

Congratulations to all entries on another exciting week of equestrian sport!