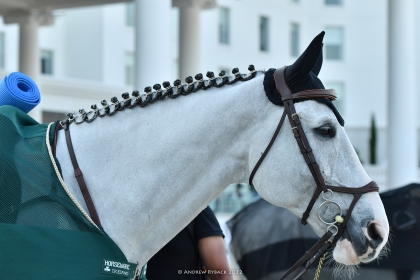 As we head into the final week of the 2022 Winter Spectacular Show Series at World Equestrian Center – Ocala, we take a look at Week XI highlights including Santiago Lambre snagging the first and third place finish in the $75,000 Lugano Diamonds Grand Prix. Continue reading to see all the featured class highlights from Week XI.

Lisa Goldman-Smolen (USA) and Barbara Disko’s Ivaro N were the only pair to produce a double clear round during Sunday’s $15,000 WEC Ocala 1.45m Jumper Classic.

“I am very proud of Ivaro N. He’s one of my younger rides. I got him as a seven-year-old from Barbara Disko. She actually bought him for me two days before I found out I was pregnant. Barbara has been very supportive, and I am so thankful for her continued support.”

During the $75,000 Lugano Diamonds Grand Prix the time allowed became a factor and just three pairs were able to produce clear rounds to advance to the jump-off. Santiago Lambre (BRA) produced two of the three clear rounds and ultimately took the win aboard his own Chacco Blue II (Chacco-blue x Naiti Rouge).

“Sharn was smart to stay more conservative to leave the rails up. Chacco Blue II isn’t a very fast horse, but I tried to go quick in the beginning so I could steady toward the end. He’s blind in his left eye, so I can’t make tight left turns, but I was able to stay out after the Coca-Cola jump to slice the chapel fence very nicely.”

“It was an Alan Wade course, he didn’t let us have an easy part,” laughed Willis. “The time allowed was very tight, I luckily just made it within the time and I usually don’t have a problem with time on Copain, but he jumped super. It was a long wait till the end of the class.”

“We imported Ghana FS Z from Europe when she was six-years-old, she is now nine. She’s super speedy, careful and loves her job. We have been slowly moving her up because she is very careful and we have been focusing on keeping her confidence.”

“Yesterday, was my first-time riding Financier. The family that owns him are from Texas and they have become good friends of mine. They invited me to come to Ocala to ride and I explained that I would really love to because WEC Ocala is such a magical place. I was so excited because this is the best facility in the country, if not the world.”

“The handy was fun. It was one track, with hard inside turns. There was an option to the trot fence, but I think most of us just went to the inside log. I don’t think it was handier one way or the other. Cypress was very good. I think he was really able to show off in the inside turn to the red brick fence.”

Molly Braswell and her own Balou Label were the best in the field in the $15,000 WEC Ocala 3’ Jr/Am Hunter Derby.

“I thought the first course rode very well. Balou Label really likes the stadium; it rides very nicely even though it looks intimidating. I do well with open courses that offer a lot of singles, then I can ride off my eye, rather than focusing on numbers.”

“The course was a bit tricky with the sun going down and the jumps set pretty big. Boreale De Talma has had some really nice rounds lately and we have been trying to find a class we could win and it happened to be this one.”

Kristine D’Andrea and her own Valeria snagged the win in the $2,500 WEC Ocala Non Pro Adult Hunter Derby, besting 27 other entries.

Congratulations to all entries on another exciting week of equestrian sport!