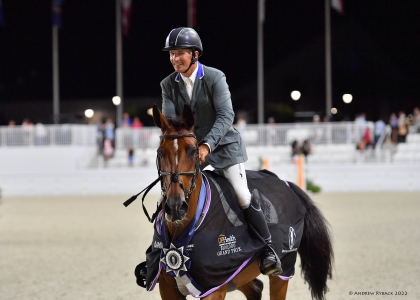 The penultimate week of the 2022 USEF Summer Series at World Equestrian Center – Ocala was packed with thrilling equestrian action. Aaron Vale and I. Adermie R 4 ruled the week, taking home the top prize in the $30,000 C. Jarvis Insurance Welcome Prix and $100,000 UF Health National Grand Prix. Read on for additional highlights from the week.

Watch Aaron Vale and Sharn Wordley race against the clock in the $100,000 UF Health National Grand Prix. At the end of the night, Aaron Vale had secured his second victory of the week aboard I. Adermie R 4.

“I did ten to the double. I was eight back to the UF Health vertical, and I don’t remember what I got to the next oxer, but we got there a bit long, so I had to do the eight to the orange vertical. I landed left then got to the last jump pretty quickly.”

Tracy Fenney and MTM Caepten stole the show in the $10,000 Buckeye Nutrition Futures Prix and led the victory gallop.

“He has been here for maybe a month now. He’s such a cool little horse because he carries his own motor and is ready for whatever you need him to do. I feel like a little kid riding him because it’s just point and shoot with him.”

“I was on top, so my goal for the handy was to take the low options and be safe, but Starfighter locked onto all of the high options, so I just stayed out of his way.”

“Both MTM In The Moment and MTM Grateful are so easy. Macie, our groom, says that they are stall-to-ring horses. No prep is needed, all you have to do is pull them out of their stalls and show up. They don’t look at anything and are both so handy. I think they both have very bright futures ahead of them.”

“I am so grateful and thankful that I am able to ride such incredible horses. This is our last week here, so I am overjoyed to end it on such a high note. Now, the horses will get a much-deserved break!”

“I noticed a lot of riders were having trouble after the first line, turning back to the third jump in the jump-off. My plan was to be be efficient there and I ended up being three strides faster in that turn alone,” Vale said. “I didn’t want to get greedy and leave a stride out somewhere else after that tight turn, so I chose to just stay patient.”

Tanimara Macari and Feminka secured a time in the $10,000 1.40m Jumper Classic that was more than three seconds faster than second place.

“It was a pretty tough course. I had three horses in today’s class, so I had three chances. On my first horse, I had one down, so I knew I had to fix a few distances on my next one,” said Macari. “By the time I returned on Feminka, there still weren’t any clears, so I just focused on staying smooth.”

Congratulations to all competitors on another great week of equestrian sport!