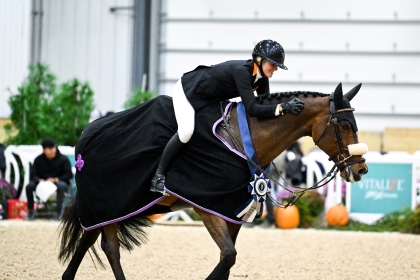 “I am still in shock. While I was riding the short course, all I thought to myself was, ‘Go faster and don’t touch the reins.’ There were so many talented riders tonight, so I knew winning was going to be a long shot, but that wasn’t going to stop me from trying. It also means so much to have my first grand prix victory at WEC. I have been showing here for three or four years now, and I barely go anywhere else.”

“I decided to pass on the inside turn to the double combination. Vincent is very careful and doesn’t like to jump combinations off the short turn, so my plan was to have a solid foot speed around the course.”

“He’s an absolute blast to ride in the derbies. This is his career; he does the derbies with me, and his owner/mother is hoping to make her show ring debut this winter competing in the crossrail or long stirrup classes. He loves both jobs and does them very well.”

Nicole Lyvere and Haribo were victorious in the $10,000 USHJA National 3′ Non-Pro Hunter Derby.

“I knew Gummy could do all the inside turns. He’s very athletic but lazy, so I am able to land and turn well. I knew the turn after the first jump, was going to be a bit of a challenge, but he stayed right with me.”

“[Eric De La Chenee] is a very athletic horse. We have had him for about year. We love his attitude and willingness. Out of all of the horses in my string, he suits me very well. He is extremely fast across the ground and over the jumps. It’s been a slow and steady progress with him, but he just keeps showing us how talented he is.”

Congratulations to everyone another successful week of horse showing!