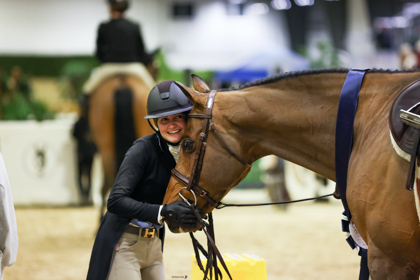 Wilmington, Ohio – Winter Classic #5 of the Winter in the Midwest Series at World Equestrian Center – Wilmington culminated with exciting wins for 15-year-old Rebecca Gutstein who notched her first big win in the $30,000 WEC Grand Prix and for Jason Berry who earned his second consecutive win in the $15,000 USHJA National Open 3’ Hunter Derby.

Gutstein of Glencoe, Illinois, bested a field of nearly all professionals in the $30,000 WEC Grand Prix. In her second grand prix of her riding career, she piloted the 16-year-old Dutch Warmblood gelding Harley David (Harley VDL x Libby) to two effortless double clear rounds. The duo stopped the clock in just 37.285 seconds for the win, setting the tone for an impressive future in the jumper ring.

Gutstein expressed her immense gratitude for her team behind her and winning her second ever grand prix, “I can’t even believe it. I am so thankful to my parents for just letting me come here and show in this. I am so thankful for Amelia [McArdle] for being the most amazing trainer. And most importantly I am so thankful for Harley [Harley David] for taking care of me and just always being as game as I am.”

Kenna Labeau and Ingleton Quasimodo Van Heist snagged the win in the $10,000 Futures Prix early on Saturday evening. Labeau, training out of Riverbank Farm and L & L Show Stables, and her own eight-year-old Dutch Warmblood gelding made their way around Anderson Lima’s (BRA) track’s with ease and confidence, landing through the timers in the jump-off in 36.417 seconds to take the win.

Labeua spoke on her partnership with her talented eight-year-old Dutch Warmblood gelding, “I imported him as a six-year-old two years ago. We moved up to the 1.30m last year and just recently jumped our first 1.40m. He was actually my first jumper, and he is a great teacher. He goes in to win just as much as you do. We will go to Florida next week and I am hoping to jump my first grand prix with him there.”

The R+L Arena saw Jason Berry of Verona, Virginia, earn his second consecutive win in the $15,000 USHJA National Open 3’ Hunter Derby aboard Rock Point. The eight-year-old Oldenburg gelding earned high scores of 93 and 89 for an overall score of 182 to top the field of seasoned professionals.

“This horse had such a big score going into the handy that I knew I could play it safe. I was a little bit worried about the airy vertical in the handy, but he is such a good jumper that when gets his eye on something he jumps it amazing. He landed left and drifted toward the gate at jump one, so it was not worth the risk of missing the change to make the inside turn, so I took the long approach,” comments Berry on his handy round.

Earlier in the afternoon Friday, Sophia Tabasso and Solitude bested the field of 25 horse-and-athlete combinations in the $15,000 USHJA National Non-Pro 3’ Hunter Derby. The 11-year-old Warmblood gelding impressed the judges, carrying Tabasso to the highest scores of the day of 91 and 96 for an overall score of 187.

Tabasso, training out of Hunt Hill Farm in Chester Springs, Pennsylvania, spoke on her longtime partner, “he [Solitude] is super special to me. I have had him for about two years now and he is the absolute sweetest in the barn. He always tries 100% and gives me his all every time. We have formed a really special bond.”

Paul Halpern and Vanessa Lee’s 11-year-old Holsteiner mare, Esra, found their place at the top of the leaderboard in the $10,000 Welcome Stake Thursday evening. Halpern of Ecuries Nova Stables in Montreal, Quebec, guided Esra to two confident, accurate rounds, just coming off a second and third place in the $10,000 Welcome Stake and $30,000 Tribute Grand Prix at Winter Classic 4.

“I have ridden her [Esra] since she was a baby and I have done everything since the very beginning. I can’t even explain how special she is. I love everything about her, she has all of the quality in the world, and all of the heart in the world. I have never known another horse like her, and I probably never will. My manager owns her, and she is a huge part of the team,” commented Halpern on his winning mount.

Congratulations to all entries on a successful show week of Winter in the Midwest 2023! We look forward to having you back for Winter Classic #6.