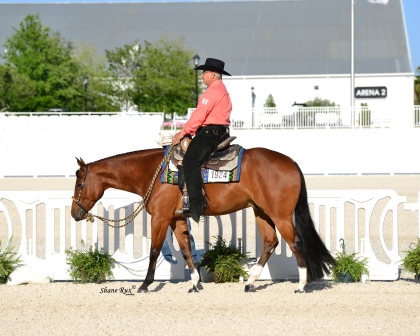 Garth Gooding and Lopin Thru Fire, owned by Michelle and Sheila Bauer,  loped away with the top prize during this evening’s $30,000 NSBA 3 & Over Limited Horse Limited Rider Finals. The talented 2018 stallion sired by The Loping Machine and out of ​​Fired Up Potential topped the class to take home a purse of $5,400, an NSBA bronze trophy, WEC scrim sheet, InStride Edition gift certificate and the stunning purple neck ribbon.

Ringside, we caught up with Garth of Bauer and Gooding Show Horses to chat about his win. “We raised this horse, and he is out of a special mare of ours that was Reserve Champion in the Masters as a two-year-old. We saved him for maiden classes this year, so he’s just getting started. He’s easy to prepare, he doesn’t have a big motor and isn’t distracted by his surroundings. All around he’s very easy, which makes for a great show horse!”.

Whitney Wilson and her own Made Suddenly (Machine Made x Best Served Hot) captured the attention of the judges, receiving first-place honors during this morning’s $2,000 NSBA 3-Year-Old Ltd Non-Pro Western Pleasure.