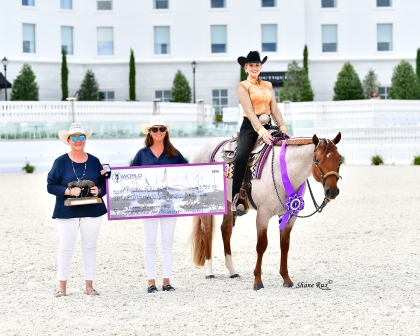 The day began in Arena 2 which showcased the $15,000 NSBA 4 & Over Maiden Trail and $2,000 NSBA 3-Year-Old Limited Rider Trail. Blake Weis and Kent Ray Taylor’s Snippity Snap (VS Code Red x Snap Krackle Pop) faced a field of fifteen during their maiden trail voyage. The pair received top honors from an esteemed panel of judges to win the first place prize.

We caught up with Taylor and Weis after the class to chat about this talented horse. “She is very stoic; she loves her job. She is very smart, and a thinker. If something goes not so well during our practice, you can go right back to it and she will figure it out.”

Next up was the $2,000 NSBA 3-Year-Old Limited Rider Trail. Patty Vatterott and Cecilia Livingston’s Three Point Won Four (Its A Southern Thing x Sheiks Miss Jazmitaz) walked away with the winning prize.

Feature class action in the Grand Arena began with the $2,000 NSBA Maturity Non-Pro Western Pleasure. Owner and Rider, Kathryne K Zachrich piloted Only A Dream Machine (The Lopin Machine x Only Version) to a first-place finish.

1. Michelle Bauer, Give Me A Good Alibi, Michelle and Sheila Bauer

VS The Fireman (Machine Made x VS Lady In Red) loped to the winner’s circle once again, this time with owner Kristen Galyean aboard in the $10,000 NSBA 3-Year-Old Non-Pro Western Pleasure. She and the 2019 stallion earned top marks on three of the four judges cards to take home the custom A Sudden Impulse diamond pendant created by Hannah Jewelry, a gorgeous purple neck ribbon and an NSBA bronze trophy.

We chatted with Kristen ringside about her stunning stallion and winning ride. “I was so nervous for this class, but we had so much fun! I split up my time between cutting and western pleasure, so this was my first time showing him and maybe the fifth time sitting on his back.”

3. JR Pickard, The Whos Who, Wayne and Judy Davis