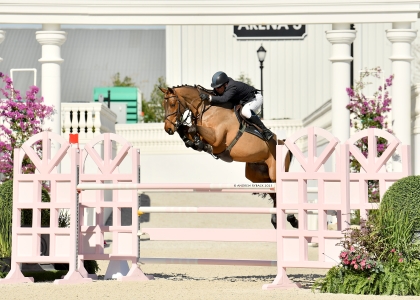 Five entries found the path to a clear first round to qualify to the jump-off and only three managed to deliver a double clean effort.

Sam Pegg and his own Dolla 3 were the first pair to keep all rails up during both phases. Pegg and the 12-year-old Holsteiner mare found a seamless first round in 75.108 seconds. The pair went straight to the jump-off rolling around the track to stop the clock at 43.487 seconds.

Last night’s grand prix winner managed to snag the second-place spot in today’s $15,000 1.45m Jumper Classic aboard All In Horses and Jan De Waard’s Nono VD Withoeve (Elvis Ter Putte x Chellana I Z). Lambre and the ten-year-old Belgian Warmblood stallion navigated a tight inside turn from one to two and galloped through the rest of the course crossing the timers at 39.774 seconds.

Aaron Vale and Cargolot PS were the final pair to attempt William’s first round track. Vale and the nine-year-old Warmblood gelding jumped clear in 75.108 seconds in the first round to qualify for the jump-off.

Vale spoke about his new and upcoming mount, “He came to me mid to late summer. The goal is to get him ready for the big classes. He has a lot of ability, but doesn’t steer the best. He’s an excited horse in a kidish way. He’s like a kid that you tell to go one way, but he sees the candy store and wants to go the other direction. Today was the first day where he jumped with focus and used some technique rather than throwing himself in the air,” joked Vale.

Vale and Cargolot PS went straight to the jump-off, “I had to go run up to teach some kids in-between my rides, but my wife [Mallory Vale] told me Santiago Lambre did the inside turn from one to two, so I knew I was going to have to do that turn to win,” stated Vale.

The pair raced around the jump-off track halting the clock at 38.507 seconds for the victory.

With many grands prix wins to his name, Vale hopes to one day capture one aboard Cargolot PS, “Today, was a nice step in the right direction. He has plenty of scope and more than enough ability, he just as to channel that talent in a ‘jumper smarter, not harder’ way. I think the more he goes, the better and better he is going to be.”