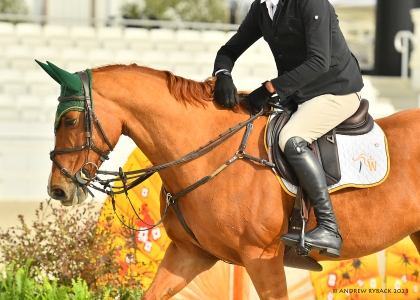 WEC: How did you find Blue Movie?

When I was 19 years old, I met Fred and Sue Welch through a friend and went to work for them in England. She owned Showtime who went to the 1996 Atlanta Olympics with Nick Skelton. Sue bred Showtime to Chacco-blue and out came Blue Movie. Sue named her ‘Carrots’ because she’s orange.

I knew Carrots from day one and I always had a feeling she was going to be really special. She was always super alert as a foal. We couldn’t even catch her in the field until she was two.

WEC: Tell us about your partnership with Carrots?

I tried to break her in, but it was a challenge. She’s always been a very sensitive mare. She’s made me understand horses a lot more because I had to take my time learning her and understanding how she liked things done.

I didn’t jump my first 1.40m until she was nine. It was a long journey to get there, but I never stopped believing in her. I knew she was going to be spectacular.

Ever since that 1.40m class, she’s been unstoppable. She’s taken me around the world. We’ve jumped all around Europe and won grands prix in Slovakia, Morocco, Algeria and all-over North America. She’s placed three times at Spruce Meadows in Calgary, Canada and won a five-star grand prix in Ocala when I first came over. She’s made my career.

WEC: What does a normal schedule look like for Blue Movie?

She’s turning 17 this year, but she still has all the same blood that she had as a young horse. Hopefully, soon she will mature a little bit, but I think she is going to go for many more years. She loves competing and thrives off the energy. She is more than I’d ever hoped for, and I believed that she would be special, but she exceeded that for me.

Now, she gets to show every three or four weeks. We try and pick a show that we think would suit her. She loves the Grand Arena at WEC – Ocala. The atmosphere here is always fantastic. It makes the grand prix even more fun as a competitor, because the crowd starts cheering as soon as you enter the ring. It’s so great to be here on a Saturday night and for the crowd to appreciate her as much as I do – the feeling is unreal.

During a normal week, she gets exercise in a different way. She’s pretty challenging to flat, so during the week she gets ponied by ‘Goose’ [Wellington Grey Goose]. She just has so much blood and energy, that to get good exercise in, it’s better to have her ponied by her best friend.

Just this past November we made Ocala our official home base. With this facility hosting so many shows throughout the year, we don’t need to travel as much because we have a premier location right down the road. I am very excited to have some three-star and hopefully some five-star events soon at WEC.

I am lucky enough to have some incredible horses in my string and I am even luckier to have known both Blue Movie and Wellington Grey Goose since they were foals. Breeding is a big passion of mine and I hope to expand with that. Carrots has two foals on the ground, and we have another on the way. So, we’ll have a few ‘baby Carrots’ galloping around soon.

My plan is to keep them and produce them. Then one day move up the ranks just like I did with Carrots.

Thank you, Rowan for taking the time to chat with us about your wonderful Blue Movie! We can’t wait to cheer you on during the Saturday night grands prix!