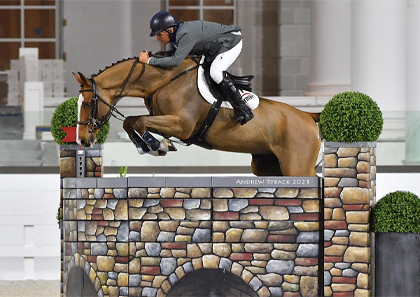 Vale and Major were one of just eight entries to jump a clear first round and return for the short course. Vale and the 13-year-old Danish Warmblood gelding topped the $75,000 WEC Grand Prix 1.50m during Week 4 of the World Equestrian Center — Ocala Winter Spectacular and returned to the WEC Grand Arena tonight to chase another win. The pair brought their A-game, with a clear first round in 85.321 seconds, well within the time allowed of 88 seconds, securing a spot in the jump-off.

Molly Ashe Cawley and Louisburg Farm’s Berdien (Bustique x Queen Z) also earned a return in the jump-off. Ashe Cawley and the 10-year-old Zangersheide mare earned 1st place in this week’s $20,000 Welcome Prix 1.45m and were on a roll again tonight. The duo managed the fastest first round of the class, leaving all rails up in 80.417 seconds, signaling that they would be strong competitors on the short course.

Grace Debney and Temple Equestrian LLC’s Zarina De Vidau (Diamant De Semilly x Carina XXXVII CH) snagged a return on the short course early in the order. Debney and the 9-year-old Spanish Sport Horse mare finished in 2nd place, just behind Ashe Cawley and Berdien, in this week’s $20,000 Welcome Prix 1.45m and were determined to deliver another top performance tonight. The pair found a clear first round in 82.604 seconds, gaining another chance at the win.

The course was adjusted and eight entries returned for the jump-off. First to contest the short course were Debney and Zarina De Vidau. The pair set the bar high, taking all available inside turns and holding a quick pace throughout the course. They stopped the clock at 45.040 seconds with all rails up, upping the ante for the remaining entries.

Debney and Zarina De Vida held the lead until Ashe Cawley and Berdien took to the course. The pair held nothing back, knowing the time they needed to beat. Ashe Cawley shaved crucial seconds off of their time with tidy rollback turns to fences 15 and 8, and topped it off with a full-throttle gallop to the final fence. The duo flew through the timers at 41.531 seconds, moving into the lead.

Last in the order were Vale and Major. Ashe Cawley and Berdien still sat atop the leaderboard, but Vale and Major were not going out without a fight. The pair mirrored Ashe Cawley’s track, staying snug to the rollback fences and galloping at every opportunity. The crowd roared as Vale surged toward the final fence, encouraging him to kick on. He and the scopey bay gelding launched over the final fence and raced through the timers at 41.122 seconds. Vale turned to the scoreboard to check his time and threw his fist in the air, celebrating his and Major’s win.

Vale took time to chat with us about his fourth $75,000 WEC Grand Prix 1.50m win of the season, “I thought the first round was quite difficult. There was a tall skinny vertical heading to the triple combination with the horizontal-striped rails. Those poles are very difficult as a single fence, let alone a triple combination. However, Major jumped it well.”

When asked about his plan in the jump-off, Vale replied, “Watching the first couple go in the jump-off, the times were fast, but not crazy fast. I didn’t get to watch Molly go, but I heard that her time was four seconds faster than Grace, so I knew it was a really fast time to get. Going in last, I knew there was a big gap between the current 1st and 2nd placings, so I didn’t want to do anything too risky to jeopardize a top placing. I caught the first few jumps pretty well, then rolled back to the oxer really quickly. I probably went way faster to B and C of the combination than I should have, but he moved his feet out of the way and jumped it clear. I turned back pretty tight to the next fence, then ran to the last fence. I didn’t have a great sense of the time, so I didn’t know where I was going to end up. When I saw the scoreboard flash up ‘Rank 1’, I was pumped. I didn’t know until then that I had won. The crowd was happy, and so was I!”

He also added, “These evening classes under the lights have been great, and the combination of that and the crowd makes for an unbelievable atmosphere. A lot of locals are coming out to watch the grand prix. The crowd is even staying to watch the victory gallop; they were cheering as loudly during the victory gallop as they were for the jump-off. It’s nice to see non-equestrians becoming fans of equestrian sports. It really makes the classes fun.”

Vale also earned 7th place aboard Empire Show Stables’ Boreale De Talma (Quick Star x Reggae De Talma), “She’s a little less experienced and just got a little too wound up in the jump-off, but overall, she was great.”

The WEC Grand Arena also hosted the $7,500 Futures Prix earlier in the afternoon where 32 entries contested a track that featured a triple bar, a triple combination, a double combination, a faux stone wall and a liverpool oxer. Eight entries managed a clear first round with just three jumping double clear, but it was Bree Rosales and Gail Dady’s California PJ (Chacco Blue x Evita) that jumped out of their shoes and into the win.

Bree Rosales and Gail Dady’s California PJ (Chacco Blue x Evita) were the first entry in the class to jump double clear. Rosales and the 9-year-old Hanoverian mare earned the Reserve Champion title in the 1.35m Jumpers last week at World Equestrian Center — Ocala and stepped up to the 1.40m track today. The pair was quick and clear in the first round in 73.370 seconds, and California PJ gave such a strong effort that she managed to jump out of two of her shoes. They continued straight to the jump-off with the same determined spirit, hugging the inside track where possible. Rosales and California PJ galloped through the timers at 37.116 seconds with all rails up, moving into the top spot and ultimately winning the class.

Tiffany Hammack and Foxwood Farm’s Ghana FS Z (Glasgow W VH Merelsnest x Uschi-Vira) were next to contest the course. Hammack and the 7-year-old Zangersheide mare earned the yellow ribbon in the 1.30m Jumpers during Week 5 of the World Equestrian Center — Ocala Winter Spectacular, preparing them well for this afternoon’s class. The pair navigated a clear first round in 74.801 seconds, then advanced straight to the jump-off. Hammack and Ghana FS Z also chose the inside track, laying down a second clear round in 38.473 seconds for 2nd place.

Rounding out the top three placings were Diego Perez Bilbao and Roberto Gomez’s Alter Ego (Cecotto’s AS x La Salina). Perez Bilbao and the the 9-year-old Warmblood gelding have taken ribbons in the 1.35-1.45m jumpers at Winter Equestrian Festival and made the trip to World Equestrian Center — Ocala this week. The duo found a clear first round in 76.171 seconds before continuing to the jump-off. They stayed snug on the short course, jumping clear in 41.008 seconds for 3rd place.

Rosales of Caliburn Farm in Marshall, Virginia and Ocala, Florida, took a moment to chat with us ringside about her win, “That was a fun course. I was so nervous when they put the wall in the ring earlier in the week because it isn’t something that I’ve schooled her over before. She acted like it was no big deal. I didn’t have a great warm up round, but she was on fire today and ready to go. My plan in the jump-off was to be as quick as I could be from 1 to 2. I was debating whether to go inside or around to the final fence after the combination, but she felt so on it and I saw the inside turn and just went for it.”

When asked about California PJ, Rosales replied, “We bought her as a 4-year-old from Germany off of a video when she was in foal. She was started by a friend of ours and was a bit difficult to start, but we worked our way up through the 5, 6 and 7-year-old classes with her. My husband, Chicho, rode her for a little while while I was pregnant with my daughter, then the moment I was able to ride again, I stole her back. She’s my heart horse.”

She added, “It’s so much fun to show at World Equestrian Center — Ocala. We feel honored to be able to show here. It’s so cool to have this in our backyard. We’re really grateful.”