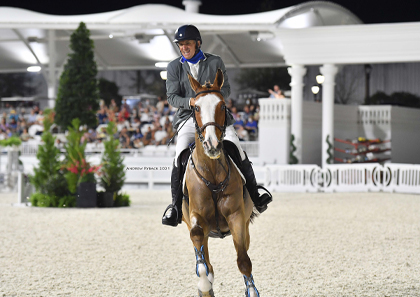 Week 8 of the World Equestrian Center — Ocala Winter Spectacular 2021 saw thrilling equestrian sport with exciting wins throughout the week. Feature jumper classes incorporated courses designed by two-time Olympic course designer, Leopoldo Palacios of Venezuela, making for tough competition. One of the many highlights of the week was the win in the $75,000 WEC Grand Prix by Aaron Vale and Sleepy P Ranch LLC’s Major (Carmargue x Pinot). With another victory under his belt, Vale has now won half of the $75,000 WEC Grand Prix classes since World Equestrian Center — Ocala’s opening in January of 2021. The week included several additional feature classes, ranging from 2’6″ hunters to 1.50m jumpers.

Thursday’s $20,000 Welcome Prix saw a field of 27 entries. The women dominated, claiming the top five placings and jumping the only double clear rounds, and it was Molly Ashe Cawley aboard Louisburg Farm’s Berdien (Bustique x Queen Z) that topped the class by more than two seconds in the jump-off. The pair managed the fastest clear first round of the class in 80.693 seconds and advanced straight to the jump-off. The duo flew across the final oxer and through the timers with a second clear round in an incredible 37.021 seconds, ultimately taking the win.

The $15,000 WEC Derby 3′ Open saw a highly competitive field of 25 entries the the scores of the top three placings remaining in the 90s throughout the class. Samantha Schaefer and her own Checkmate (Cassini II x Cornancer) earned top honors laying down two foot-perfect rounds. The pair earned a pair of 95 scores for a total of 190 and the blue ribbon.

Friday’s $15,000 WEC Derby 3′ Non Pro saw forty entries vying for the win, but it was Christopher Coberley that notched another win in the class, this time aboard David Glefke’s Undercover (Untouched x Tosca). The duo earned scores of 90 and 88.5, totaling 178.5 for 1st place. Coberley also earned a top placing aboard Havens Schatt’s Actender PS (Action Breaker x Conpila). The duo earned scores of 87.5 and 87 for a total score of 174.5 and 3rd place.

The prestigious Style of Riding Award was presented to Doug Boyd during the $20,000 WEC Hunter Derby 3’6″-3’9″ for his classic style and his sportsmanship. The Style of Riding Award is generously donated by Bill Rube to be awarded to the rider who best displays the American Style of riding in the ring and sportsmanship outside of the competition arena. The recipient serves as a role model for preserving the integrity and tradition of equestrian sport. “This award is very special to me because the recipient of this award pays it forward both in and out of the show ring,” says Rube. Boyd received an elegant leather duffel bag and wore a white rose corsage on his lapel throughout the handy round to signify his achievement.

The Shapley’s Champion Groom Award for the best turnout in the class was presented to the groom of 3rd place finisher in the $20,000 WEC Hunter Derby 3’6″-3’9″, Ruby Tuesday. Shapley’s is a proud sponsor of the World Equestrian Center and is thrilled provide an award each week of the Winter Spectacular to the groom of the best turned out horse. Ruby Tuesday’s groom received a Shapley’s Award Bucket for the mare’s stunning turnout.

Saturday night’s $75,000 WEC Grand Prix under the lights included a field of 29 entries representing eight countries. Riders included Olympic medalists and World Games competitors, making for fierce competition. The jump-off saw a head-to-head battle for the win, but it was Aaron Vale who notched his fourth $75,000 WEC Grand Prix 1.50m win of the season, taking the blue ribbon aboard Sleepy P Ranch LLC’s Major (Carmargue x Pinot). The pair brought their A-game, with a clear first round in 85.321 seconds, then returned last in the jump-off to steal the win in a time of 41.122 seconds. With another win in the bag, Vale has topped half of the $75,000 WEC Grand Prix classes hosted since World Equestrian Center — Ocala’s opening in January of 2021.

Saturday also hosted the $7,500 Futures Prix where Bree Rosales and Gail Dady’s California PJ (Chacco Blue x Evita) jumped out of their shoes and into the win. The pair was quick and clear in the first round in 73.370 seconds, and California PJ gave such a strong effort that she managed to jump out of two of her shoes. They continued straight to the jump-off with the same determined spirit and galloped through the timers at 37.116 seconds with all rails up, moving into the top spot and ultimately winning the class.