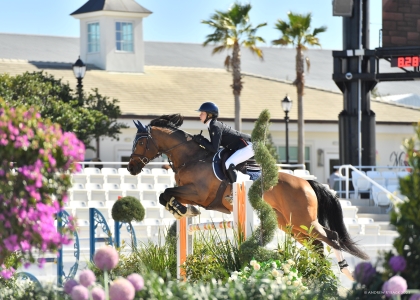 Ocala, FL – Forty-two rising stars of show jumping took center stage this afternoon to put forth their best effort against FEI Level III course designer Ben Townley’s (GBR) intricate $15,000 Buckeye Nutrition Futures Prix tracks. The afternoon culminated with Alexanne Thibault (CAN) and her own Cidanos Z rising to the top of the leaderboard and galloping away with the victory.

Ben Townley’s first round track proved difficult for many and only 13 managed to navigate the first-round fault-free. Of the 13 clear first round rides, an even eight earned double clear honors.

The fastest jump-off time was secured by Alexanne Thibault (CAN) and her talented eight-year-old Zangersheide gelding by Cidane. Thibault and Cidanos Z found an effortless first round in 67.038 seconds to qualify for the immediate jump-off.

Thibault spoke about today’s elaborate tracks, “The course was nicely built. The lines rode pretty normal and there were quite a few single jumps that you had to ride off your eye. I think the width of the oxers surprised many horses, but Cidanos is very careful and has a decent amount of scope.”

The pair advanced straight to the jump-off at the sound of the tone, “I know this class is very competitive here and always has a lot of entries, so I knew I had to give it my all. I preferred taking the risk and going fast rather than being too conservative. Cidanos is very quick and careful off the ground, so I knew he would leave the fences up.”

“I think I made up the time to the double combination. When I was watching other competitors many of them slowed down to the combination, so I just let him go in his normal gallop and he backed himself off the jump to balance and that’s where I think I had the class,” told Thisbault.

The pair soared through the timers halting the clock at an uncatchable 30.563 seconds.

Thibault is hoping to make her debut under the lights on Saturday night with Cidano Z by the end of the Winter Spectacular show circuit, “The goal is to do the Saturday night Grand Prix by the end of circuit if he’s ready. I don’t want to push him too fast because he’s only eight, but he has been doing so well recently and proving to me that he’s ready to step up. Next, we will do some 1.40m and 1.45m classes and if all goes well, we will do the grand prix.”

Brandon Howard (USA) and Homeward Farm’s HF Costa Rica (Comte x Arielle) were just behind the winning pair. Howard and the 15-year-old Hanoverian mare delivered a textbook performance in the first round, leaving all rails up in 68.588 seconds. The pair jumped-off immediately finding a very efficient track in 31.203 seconds to slide into second place.

Third place honors were earned by Bryn Sadler (USA) and Showcase 81, LLC’s Cinven CR (Clearway x Raissa CR). Sadler and the 15-year-old Holsteiner gelding navigated a speedy first round in 65.524 seconds, well under the time allowed of 71 seconds. The pair went straight to the jump-off, finding each fence out of stride to stop the jump-off clock at 32.384 seconds.

On Friday evening, the WEC Grand Arena boasted top-level equestrian sport as 23 starters led the way over the $15,000 1.40m Jumper Classic first round track which was designed by FEI Level III course designer Ben Townley (GBR). Penny Brannan and her own Vertigo Delorme emerged victorious snagging the fastest jump-off time out of a competitive 12 horse jump-off.

Of the 12 jump-off competiitors, only four managed to keep up rails up in the short course with Rowan Willis (AUS) claiming two of the double-clear positions. Willis earned his first double clear aboard Crooks Show Jumping, LLC’s Reemah O.L. in 35.941 seconds.

Their clean and fast round wasn’t caught until Addison Reed and Reed Training & Sales LLC’s Goliath (Zirocco Blue VDL x Sirene) entered the arena. Reed and the 12-year-old Dutch Warmblood gelding navigated a blistering fast jump-off in 33.293 seconds to slide into the lead.

Rowan Willis returned to the arena aboard his second mount Cornet’s Girlensky. Willis and the talented mare raced around the jump-off track leaving all rails up in 34.251 seconds, just behind Reed and Goliath.

Penny Brennan and Vertigo Delorme (Chacco Blue x Frentana) were the final pair to yield a double clean effort in the $15,000 1.40m Jumper Classic. Brennan and the 14-year-old Westphalian stallion are just coming off a recent win during last week’s $15,000 Buckeye Nutrition Futures Prix. Today, the pair continued their successes after laying down a speedy track in the jump-off in 33.005 seconds to snag the victory.