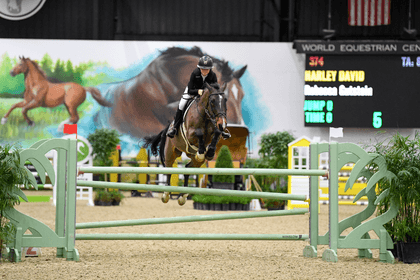 Lima’s first-round track proved difficult for the field of horse-and-athlete combinations as only five moved onto the jump-off phase of competition. The intricate course included three gymnastic elements and two incredibly short turns off the rail, leaving many riders with four-fault scores.

Gutstein, training out of Old Barrington Farm in North Barrington, Illinois, made light work of the evening’s course. The 15-year-old junior rider was nothing short of spectacular, besting a field of nearly all professional athletes in the second grand prix performance.

Gutstein expressed her immense gratitude for her team behind her and winning her second ever grand prix, “I can’t even believe it. I am so thankful to my parents for just letting me come here and show in this. I am so thankful for Amelia [McArdle] for being the most amazing trainer. And most importantly I am so thankful for Harley [Harley David] for taking care of me and just always being as game as I am.”

The 16-year-old Dutch Warmblood gelding cruised around the difficult first-round track with ease, putting pressure on the rest of the field. The talented gelding owned by Samuel Parot carried Gutstein to a four-fault score in their first grand prix together at Winter Classic #2 and returned to the Sanctuary in top-form.

“It was my first time ever coming back for a two-way jump-off. My plan was to gallop up the first line in nine and shave off the first part of the turn. I squared up to the Osphos oxer in the corner and steadied in eight to the combination since he has a bit of right drift. I slipped through the inside turn and was careful to the liverpool. I landed and went right inside to last oxer and galloped down in eight,” explained Gutstein on her winning jump-off plan.

The duo stopped the clock in just 37.285 seconds for the win, setting the tone for an impressive future in the jumper ring.

Richard Rinehart (USA) of Rinehart Farms in Westfield, Indiana, made his return to the winner’s circle on his consistent partner, Vincent (Van Gogh x Nirande). The 11-year-old Dutch Warmblood gelding is no stranger to the Sanctuary, boasting an extensive record of wins in the open jumper classes at World Equestrian Center – Wilmington. The duo yielded two foot-perfect clear rounds and looked to best Gutstein’s winning time. One extra stride and slightly wide turn to the third jump resulted in a time of 37.46 seconds, ultimately securing the second place position.

Nicole Loochtan (USA) of Stone Creek Stables in Lexington, Kentucky, scored another third and fourth place finish, this time in the $30,000 WEC Grand Prix. Loochtan earned third place honors aboard her longtime partner Caiman Des Sequoias (Radco D’ Houtveld x Sublime De La Cour). As the last pair to try their hand at the jump-off track, they had their sights set on the blue ribbon. The 15-year-old Belgian Warmblood gelding was quick and careful across the ground, impressing the crowd with his unmatched speed. However, the duo was not quite quick enough to catch the top two, galloping through the timers in 38.238 seconds to round out the podium. Loochtan and her brand-new mount, It’s Me Du Bosquetiau (Dayton Sitte x Mirette Du Bosquetiau) were the first to jump-off in a time of 40.009 seconds to earn fourth place.

Nineteen horse-and-athlete combinations made their way around the grand Sanctuary Arena early Saturday evening for the $10,000 Futures Prix. Anderson Lima (BRA) set a winding first-round track that required athletes to maintain their impulsion through the turns to ensure a fault-free ride. In the end, it was Kenna Labeau (USA) and Beth Lebeau’s Ingleton Quasimodo Van Heist that mastered the tracks and jumped a double-clear effort to snag the win.

Labeau, training out of Riverbank Farm and L & L Show Stables, and Ingleton Quasimodo Van Heist navigated their way around Lima’s (BRA) technical first-round track with ease and confidence. The field saw many athletes that made late decisions in the unrelated bending lines, costing multiple four-fault scores, however Labeau saw no challenge in the task, maintaining and even canter to meet each jump accurately.

Labeua spoke on her partnership with her talented eight-year-old Dutch Warmblood gelding, “I imported him as a six-year-old two years ago. We moved up to the 1.30m last year and just recently jumped our first 1.40m. He was actually my first jumper, and he is a great teacher. He goes in to win just as much as you do. We will go to Florida next week and I am hoping to jump my first grand prix with him there. ”

The duo moved into the immediate jump-off looking to best Paul Halpern’s (CAN) leading time. The young, talented athlete galloped out of the second bending line of the track to secure her win. Labeau shared on her jump-off, “I walked it and I felt really comfortable going in. He was going really great. The biggest thing is that I am not the type of rider that likes to go fast, so I was really just trying to have smooth clear rounds. I wanted to add in the second bending line in the jump-off, but he was on it, and he took me to it, so I stuck right with it!”

Labeau added a great win to her record with the young horse with a jump-off time of 36.417 seconds.

Taking their second red ribbon of featured jumper competition at Winter Classic #5 was Rebecca Gutstein (USA), training of out Old Barrington Farm in North Barrington, Illinois, and her own Completely Nuts. Gutstein, eager to earn another podium finish, trusted her mount and stuck to a conservative first-round to ensure a place in the jump-off. Though the 15-year-old Oldenburg gelding was careful over each fence and quick across the ground, they were just shy of the winning time. Landing through the timers in 37.701 seconds, they earned another second-place finish.

Winner of Thursday evenings $10,000 WEC Welcome Stake, Halpern (CAN) of Ecuries Nova Stables in Montreal, Quebec, earned another top three placing in the Sanctuary, this time aboard Lady Coretta B. The eight-year-old Warmblood mare owned by Rebecca Irvine posted two effortless double-clear rounds, showcasing experience beyond her years with incredible scope and style. The duo jumped to a time of 38.504 seconds in the jump-off phase to earn third place honors.